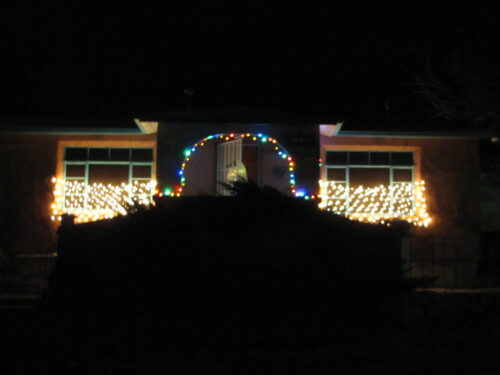 Here we are again, after a relatively quiet year here in Silver City, NM. We didn’t travel but we had plenty to do. 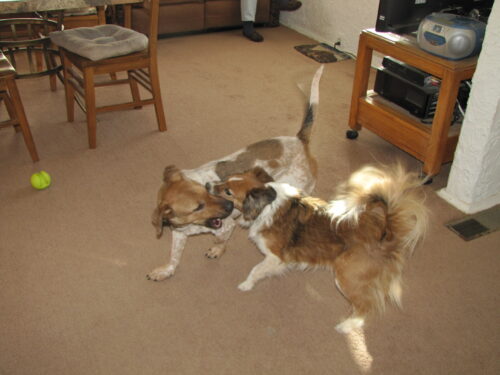 Both our dogs are still with us. Nicky, our older one, is 12 now, and his hearing isn’t so good and he needs to go outside and pee more often. Kelly added dog doors so the dogs can go out even when we aren’t home. 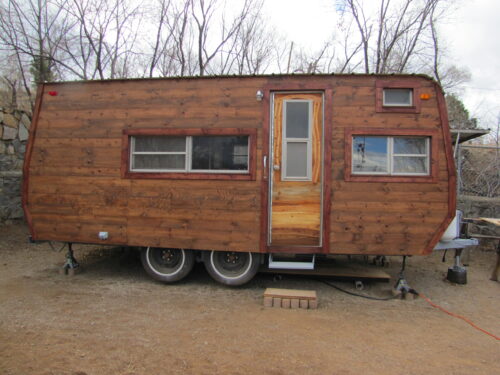 Last year, Kelly transformed a small trailer into a Sculpted Tiny Home, and then he sold it. 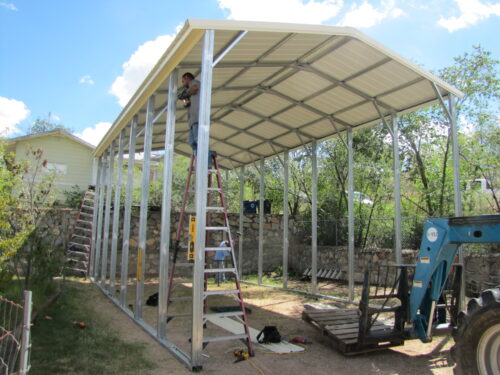 With the proceeds from that, he added a carport in our driveway. 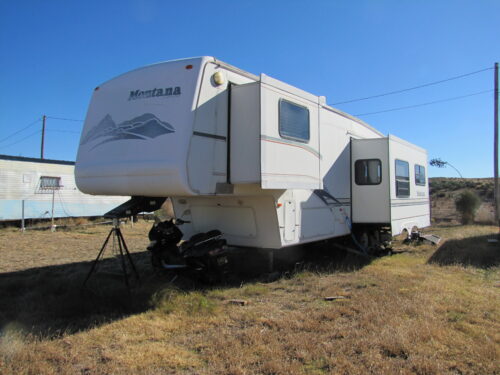 Then he bought a fifth wheel trailer which will be his next Tiny Home project. He’s just getting started on that now.

He decorates them in various ways. Mainly using a method called marquetry, which is wood inlay art. Here are some examples of what he has done. 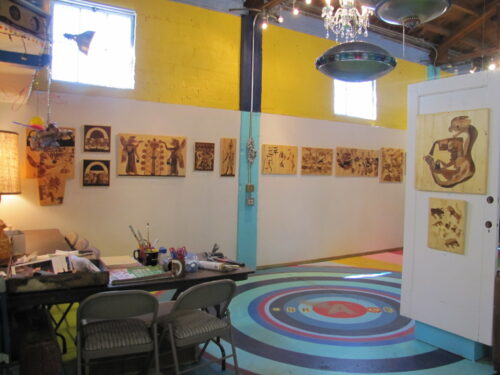 Currently much of his recent inlay art is on exhibit at a local gallery. 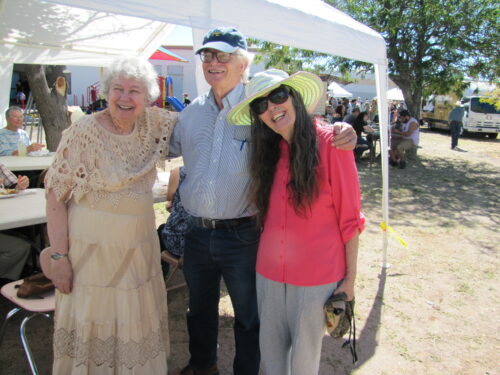 We celebrated our 50th wedding anniversary on August 20, with lunch out with friends. Then Rosana turned 80 on Sept 24. She grumbles that she is now officially an Old Lady. Kelly reached 79 on November 13.

We have quite a few routines. Kelly and his daughter Ajila play canasta most Sundays. She is in San Francisco, but they have developed their own way of doing it on their phones with Facetime. Rosana usually goes to church (the Episcopal Church of the Good Shepherd, here in Silver City). Most weeks we have lunch out with our friends Candice Burke and George Carr (shown above with Rosana), and Rosana often chats on the phone with her sister back east. Every month, Rosana chats with her friend Rohana McLaughlin, who lives in the same house in Marin she has lived in since around the time we became friends with her, about half a century ago. Her kids are a bit younger than Ajila.

The larger world does get our attention. How could it not? We read the New York Times online, following events in Ukraine and elsewhere, and praying for wellbeing. Kelly remembers the wonderful people he met in both Russia and Ukraine when he made a documentary film there in 1985. We regularly do latihan, our Subud spiritual practice.

Rosana has a Facebook page at https://www.facebook.com/rosanahart/ which you are welcome to join. She comments on our activities, writes about books and dogs, and posts things she likes that others have put up. This year she has invited a lot of Subud members from around the world to her page. It also has a lot of people she actually knows in person (including many of you who get this letter).

Rosana taught a memoir writing class at the local college, but she has to admit that her current book, a memoir about her father, has been bogged down.

Kelly was invited to participate online with an international panel during the Global Peace Week convened to discuss how we can attain comfortable shelter for all life on Earth… a very tall order! You can watch this week-long event, including Kelly’s panel at http://theone.stream/videos-on-demand

We do watch television, usually documentaries while eating dinner, and we read a lot. Rosana’s absolute favorite book of the year is A Most Remarkable Creature: The Hidden Life and Epic Journey of the World’s Smartest Birds of Prey, by Jonathan Meiburg. It’s about caracaras, a family of birds that share curiosity and openness with humans. She liked it so much that after reading a library copy, she bought a hard copy for herself and immediately re-read it.

Its cover is the first image in this Thanksgiving Day collage that Rosana made. Next is our cat Misty, waiting for us at the Rainbow Bridge after dying of old age last year. Then Nicky, then Lilly napping. The laptop represents contact with the online world. There’s a little photo of us, and the last picture is Rosana on our front porch. All are surrounded by the universe. 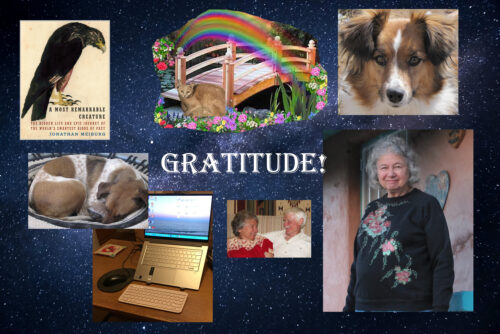 Rosana had a bout of arthritis earlier this year, for the first time in her life. She discovered that walking most days and taking a supplement called Osteomove have gotten the pain down to almost nothing. We both had hearing tests as part of our regular health care. Rosana is still gloating that the audiologist told her she has “very, very good hearing” and that she needn’t come back for at least a couple of years. Kelly’s hearing has declined some, especially after he had an unfortunate ear lavage last year, but his health is excellent and his weight is perfect. Rosana is, well, plump.

We have a friend named Doug Winter who has done a lot for the people around the border. We use his website for donations when we shop at Amazon. See his site at Dormir es Poder

We’ve listened to a lot of music this year, including a Ken Burns jazz series on PBS via Amazon Prime. Rosana has a membership with the largest version of Amazon Music, and she’s been happy to rediscover musicians she hadn’t heard for years.

Our very best wishes to you! We love hearing from you!

Updated: Thursday, December 22, 2022
Please note that I may make a commission on things you buy through this site. More info here.