What are the best gas cans for transporting, storing, and pouring out five gallons of gasoline? That question came up when the one gas station in our small Colorado town went out of business. (Update: The town has gas again, and we moved away. But there are many times when you might want to store some gasoline.) My husband was going to go to a hardware store and buy something that looked well made, but I said, “Let me do some research. I’d like to get a really good gas can.” There are larger ones but 5 gallons weighs enough that I didn’t look into anything larger. If you need more gas than that, better to get a couple of 5 gallon cans or however many would meet your needs.

Metal or Plastic Gas Cans: Which Are Better?

I thought this would be a simple question but I ended up reading threads on all sorts of forums, and people have strong opinions both ways. Both kinds of cans have their drawbacks… gasoline can leach into the plastic over time, and metal can rust out. One person argued that the gas stores better in metal because it blocks all the light into the can; if this is true, you can work around it with a plastic can by storing it in a relatively dark place. Another point is that there are many different kinds of plastic used in the cans. I also saw the point made that the metal gas cans are better than the plastic ones because they are more rugged, but other people mentioned having to throw out older metal gas cans after they rusted out.

My opinion: it’s a wash, with the quality of the design and construction being more important than the material used.  How you use and store the can (see further down) is at least as important as what kind you get.

Here are some top-rated gas cans at Amazon. I read a lot of the reviews. All of these gas cans have many reviews (generally over 100) and score very highly.

This can (the one in the photo) has a button to help you pour the gas with much less likelihood of spilling. The name of brand emphasizes that feature… it’s No Spill.

This brand is very popular, and seems to have done its homework on an important point, how to get the gas into your vehicle without making a mess.

There is a 2.5 gallon version and also 1-1/4-gallon one. Do note that the 1.25 gallon container costs almost as much as the one that holds twice as much–but there could definitely be times you’d want the smaller one, since when full it would weigh half as much. Personally, I’d rather be dealing with a smaller one.

With a self-venting feature and other good design aspects, this is the most expensive gas can that we considered, but the customer reviews are very favorable. It’s made of galvanized steel and has top or side seam. It’s bottom seam is described as being double interlock and made without welding.

Here is the page about this gas can, along with the Eagle company specs and of course reviews.

Eagle makes another  metal 5-gallon gas can, costing a good bit less. This is the one we bought, and it works fine.

How Do You Transport Gasoline Safely?

With gasoline being as dangerous as it is, you want to transport it safely. Use an approved container, like the ones listed above. Never put them in the passenger compartment with people, where fumes could be a problem and fire could result accidentally if someone lit a match or a cigarette.

Put them in the trunk or in the back of a pickup, upright so they won’t spill, and wedge them in, or tie them, so they won’t fall over. If you are transporting them on the roof of a vehicle, cover them with a tarp to keep the sun off.

In any case, don’t stop for a meal or shopping leaving them in the direct sun where they could get really hot!

A very long thread about fuel cans, (27 pages when I was first there and 46 pages when I checked the link later), tending to the technical, with a lot of pictures. Way more than I wanted to know, but you might be different.

Short article in Popular Mechanics, where they compared three 5 gallon plastic cans for how easily they poured, how much they tended to leak if kicked over to imitate bumpy roads, and how from what heights they could be dropped before they split open. I’m not sure these are the most important factors, but it’s interesting.

Good article on ehow, about how to transport gas safely, with links to related articles.

And here is an article which describes in some unpleasant detail the burns a few people got while using plastic gas cans, when explosions occurred.

In summary, we have always been very careful about how we used 5 gallon gas cans, and I hope this helps you to make the best choices for your situation.

If you’re on Pinterest, this image is sized for there: 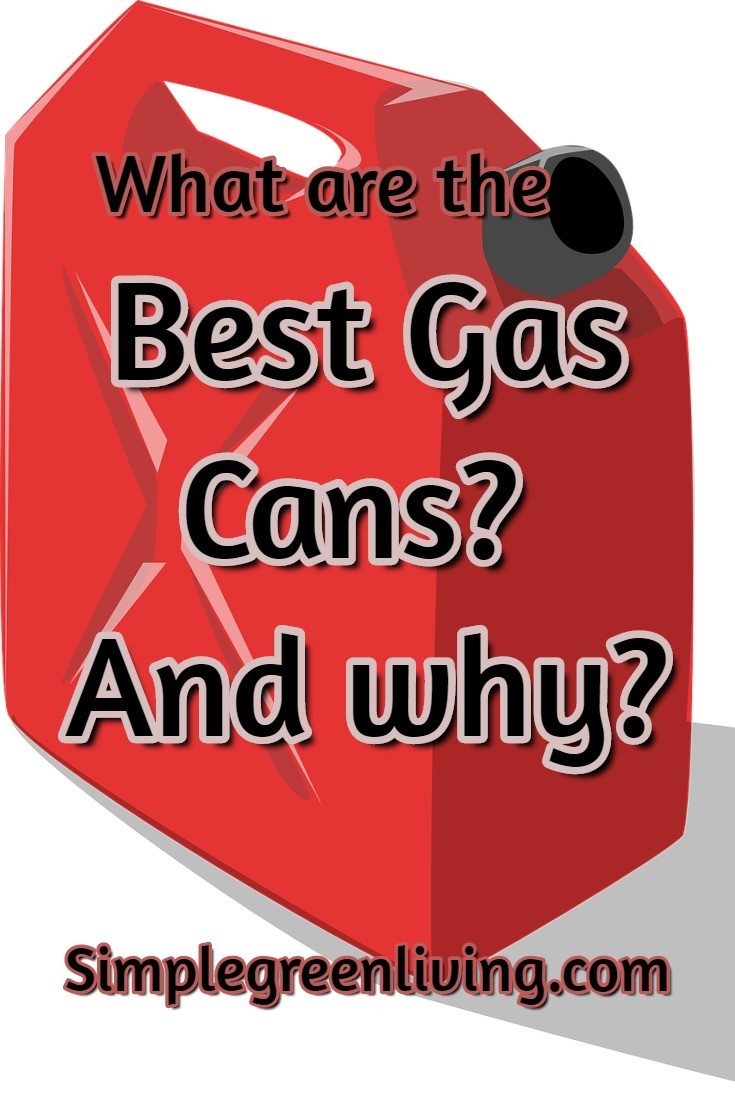 Updated: Friday, June 30, 2017
Please note that I may make a commission on things you buy through this site. More info here.