Our two philodendrons add a lot of character to our small house. 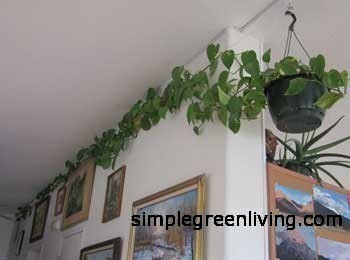 We grow them up high, out of the way of pets and people — partly because they take don’t take up any of our space that way but also because they are poisonous house plants. The one in the top picture here has been trained along some twine running the full length of our living room. It’s been growing for about a year and a half. Once, in a house we lived in for four years, we had a philodendron plant that circled our living room twice. (Admittedly it was a small living room.) When we sold the house, the plant stayed there! We could have taken a clipping to start from, as it is easy to root clippings in water, sand or potting soil. But we were about to travel for months, so we didn’t. The heartleaf philodendrons are easy to find in nurseries, or you could beg a clipping from someone you happened to visit who had them growing. As the philodendron is a tropical jungle plant originally, it likes its light filtered, which is what we give it. You can see that it is in a hanging planter, and I water that once or twice a week. Once in a while, I give it some fertilizer. Now that we have a worm bin going, I usually give all my houseplants some worm tea now and then. Here is some information I found from the University of Nebraska Extension website:

The genus Philodendron is a large one, comprised of approximately 200 species, however only a few of these species are commonly grown as houseplants. The Philodendron genus can be broken down into two basic groups: climbing and non-climbing types. The climbing types develop long vines and are usually grown in either hanging baskets or given a support on which to grow. They produce aerial roots along their stems, which intake water for the plant and attach themselves to any available support. 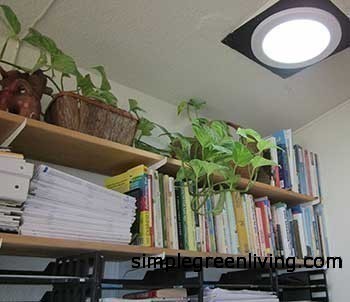 In my office, I have a philodendron with variegated leaves. You don’t see where it started here, in another hanging planter, but you can see that it likes the overhead solar tube light. Where will they grow to in the next few years? Hmmm… maybe my husband will have to put up a photo of me at my desk, covered in philodendron leaves! (If I were better in Photoshop Elements, I could do it right now. But I’ll just let my philodendrons grow.)