Is there a contradiction between advocating simple living and writing about cheap backyard swimming pools? If it’s hot–which it is in plenty of places in summer–then an inexpensive plastic pool can save you a lot of gas and time if you have kids at home. I considered the under-$100 version for Kelly and me, but we came up with an easier solution. We are keeping our hot tub at about 85 degrees. It’s been way too hot to even think of a nice hot soak, so this is working great. If you did get a pool, once it wore out–which happens quickly for some people, after quite a few years for others–no doubt you could find ways to reuse a large piece of aging plastic, like a ground cover over poison ivy. I just made that one up!

We’ve been keeping our house quite open all night and then closing it up by mid-morning. We open it up when it feels cooler outside than in, which has ranged from about 4 pm to 7 pm. Then we run a big window fan in the bedroom. A simple system like this might be all you would need, if you live in a cool area.

But during the really hot days we had a couple of weeks ago, that wasn’t enough to cool our bedroom to a good sleeping temperature. We had had an RV swamp cooler when we roamed the west in our bus back in 1996, and it had worked well when we needed it, which wasn’t a lot. So I did the research and chose something which has worked out well for us.  We like it. Swamp coolers work by evaporation, so they work well in dry climates, like most of the American west. They are not so good in the many humid parts of the globe. In a really humid climate, they are little more than fans. Still, if one might work for you, they are more eco-friendly as they use no coolant chemicals. They do require a little electricity

Here is what we got: 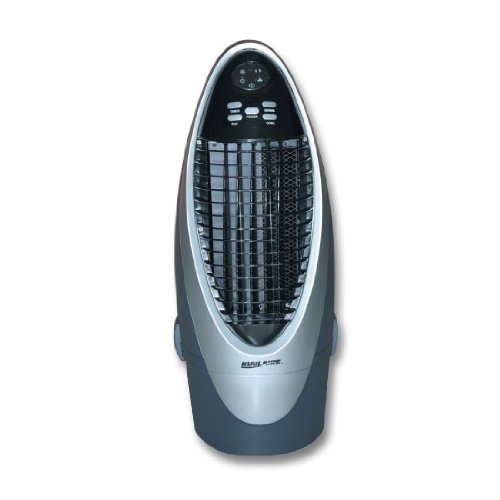