My husband and I write down what we spend whenever we get home, right on a clipboard we keep in the kitchen by the phone. Why? It really keeps us on track. If we’ve been eating out more than usual, there the numbers are, staring us in the face.

Well, the numbers sitting on the clipboard are not that useful just by themselves. But we enter them in our computers, using one of the many apps that are available. Once we’ve done that, using various categories we’ve set up, then the facts do jump out at us. Sometimes it isn’t pretty, but we’ve been doing this long enough that I think it often reins me in. My husband Kelly is intrinsically very, very frugal, where I am somewhat frugal by nature.

We used to divide everything into essential and non-essential. But after one too many arguments about where something belonged, we stopped keeping track that way. But we do categorize our clothing purchases by his and mine, and I think he is resigned that mine will always be way more than his!

We’ve found it useful to categorize our food three ways: groceries including takeouts, food and snacks we eat out, and nutritional supplements.

It’s a good idea to keep up with this on a regular basis… I do it once a week, usually. When I get WAY behind, which does happen sometimes, then errors creep in.

What program to use? There are many, and I don’t know much about most of them. We used Quicken and Quickbooks, but now we use one called Moneydance, which is also double-entry bookkeeping and we use it for our business. We switched to it when I got a Mac and needed to get something that would work on it as well as on Windows… this is easier and cheaper than those other programs, too.

We put our files in Dropbox, so either one of us can access them,and we each do parts of the data entry, on different days of the week.

There are also easy-to-use apps that work with smartphones, and then you wouldn’t even have to wait till you got home!

We’ve done this for many years, and here’s a bit I found from a young woman who is determined to pay off her student loans, about why it’s important to her to keep track:

If you’re in debt, most of the time it’s because you’ve overspent. Exceptions would be if you only have mortgage or student loan debt. But most Americans have credit card debt. In fact, the average amount of credit card debt for each household in the U.S. is $9,797.38. That’s a lot of debt.

Without tracking your expenses, it’s hard to know where you’re overspending.

We have no credit card debt from one month to the next, and that’s one of the benefits of logging our data. Credit doesn’t seem like funny money to us. And we don’t spend money that isn’t in our checking account… umm, haven’t done that in years but we used to do it at times.

To me, an unexpected benefit of keeping track of what we spend is that we have been able to afford to do a lot of great things. I estimate that we have lived at least as well as people who have earned two or three times what we have! 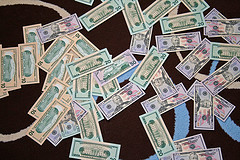