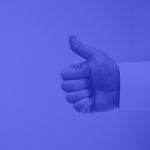 Researching Justrite gas cans, I’ve been extremely impressed with their safety and usability features. On this page, you’ll be able to draw your own conclusions, not just from the text but also from videos and PDF files as well as links to reviews. The featured image next to this paragraph is both a thumbs up for these cans and a reminder that if you run out of gas, you could be hitch-hiking!

If you’re in a hurry or already know you want a Justrite safety gas can, here’s a link to a best seller Justrite 7250130 Galvanized Steel, AccuFlow Type II Red Safety Can,5 Gallon Size.

These two often come up in the best sellers in their category and they are very favorably reviewed.

This is  the best seller of all hazardous storage cans at Amazon as I write this, and I have often seen it in that position.

It may be partly because the Accu Flow feature gives you such good control as you fill a gas tank.

I wondered why until I began reading the reviews. People sure prefer them to cheaper plastic cans they have had! Of course, there are always a few grumbles for any product that has hundreds of reviews, but this is well regarded. Click on the image to read reviews.

This model is the red one, and red is the standard color for gasoline. It comes in yellow, blue, and green as well… yellow is standard for diesel, blue for kerosene, and green for oils.

I like this gas can for being only 2.5 gallons. As a small woman and not as muscular as I once was, the weight factor is important to me. Remember the old saying, “a pint’s a pound” referring to water? So for gas it’s about identical. A quart weighs 2 pounds, so a gallon weighs 8 pounds, and a 2.5 gallon load weighs 20 pounds. Plus the metal weighs several more pounds. I can manage this but I think a larger 5 gallon one would be pushing it.

A Video from Justrite Describes Features of the Safety Cans

This video is titled Justrite Type II AccuFlow™ Safety Can. This two-minute video shows one of these cans in use and provides a slideshow describing its features and the safety standards it meets.. I was interested in the shot taken from inside a can showing how the gas goes through a wire mesh filter as it enters the can.

By the way, Type II cans have an opening for pouring and another one for being filled. From what I’ve read on forums, people generally prefer Type II and some complain that Type I, with just one opening for both in and out, is more prone to leaking when being used. Both the top cans listed above are Type II.

Another Video that Described the Justrite Gas Cans Well

I found this video to be quickly informative. Made by a company that distributes Justrite in Canada, you can just watch the first minute and a half or so for the gas can part:

Storing Your Gas Cans with a Justrite Safety Cabinet

I’ve got a few gasoline storage tips here, and I also just discovered these cabinets. Justrite makes a whole line of safety cabinets to store dangerous chemicals.. (That link takes you to the search page on Amazon for Justrite Safety Cabinets.)

Here’s one of the smallest of their cabinets: 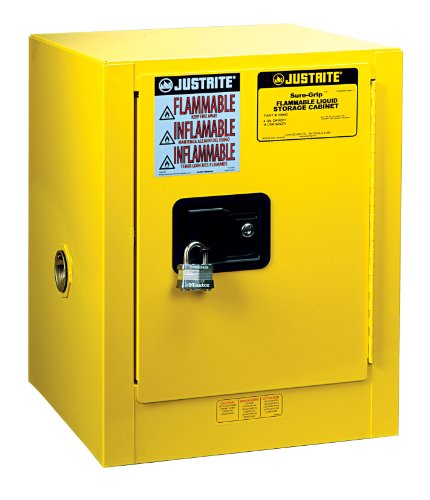 These are useful to print out or just open on your computer.

Safety Cans and Containers is a well illustrated 11 page file from Justrite. It covers more than gas cans.

What Makes a Safety Can Safe? Is two pages, mostly text, written by Glen Carter, who is chief technologyofficer at Justrite. Good general info, not specifically about the features of their cans.

The people who run this company are well aware of the inherent dangers of handling flammable liquids, and as this video shows, they do training for their industrial customers. And they sometimes hear stories back from those customers about how their products helped someone avoid being burned when an accident occurred. Here’s the five-minute video:

It’s not just gas cans at this company. Here are their main category of products:

I noticed on their website that replacement parts are available.

So Would You Buy a Justrite Gas Can?

If you need one or more, Justrite gas cans are tops in safety and usability.  On a personal note, when I was growing up my mother had a job writing engineering textbooks for the U.S. Navy. She wrote their first aid handbook as well, and she was always a big fan of safety measures. She passed on many years ago but I kinda felt her helping me on this blog post, nudging me to emphasize safety! 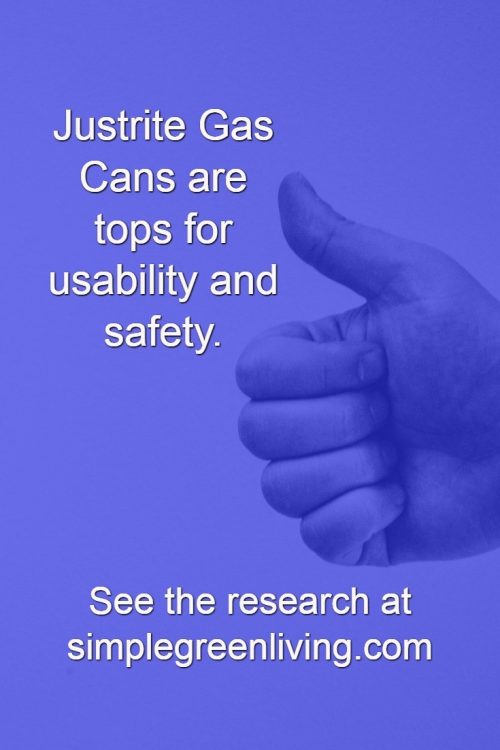