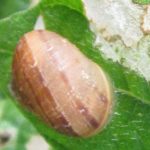 We have hundreds of snails in our backyard, all over our large vegetable garden. No, I didn’t count them, but when you can see a dozen on one bush bean plant, just do the math. I think they are kind of cute (never thought that about slugs!) and I wish we could co-exist. But they are voracious, especially in these numbers. Most of them are tiny, but quite a few seem to be fully grown and probably producing the babies that are everywhere.  We do have a few slugs, not nearly so many. Luckily, all those snails are only creating a problem for our bush beans. Everything else is only slightly affected if at all.

This is our first year gardening here in southern New Mexico at 6,000 feet. The other day we learned from our neighbors that the snails are all over town, every year. Some friends who moved to a higher elevation not far from here say the snails don’t like their colder winters.

At first, stomping on the snails kept their numbers down, but they got ahead of us.

We’d heard of putting out beer… we normally keep my husband’s favorite dark Negra Modelo on hand, along with the lighter Stella Artois. Niether are cheap. Would the snails care which kind? The next time Kelly opened one, I begged some dark beer from him and put it in the garden in a catfood can I had rinsed out for the occasion. One large snail went in, and then it became pretty full of smaller ones.I hoped they had died happy.

But this morning when I went out to collect green beans for a soup I’m planning to make for dinner, I was overwhelmed by the snails everywhere. They seem to be doing the most damage to the bean plants, but I saw them on kohlrabi, radishes, peppers, and other things.

Getting Rid of Snails in the Garden

I had one advantage over the snails: I could search the internet for how to get rid of snails in the garden. By the time I sat down to write this article, I had so many tabs open in my browser that it’s a wonder it didn’t crash.

Here are some of the methods that people describe, with links to their webpages…

At WikiHow, they had a lot of ideas.

The article started out with beer, but on a larger scale than we have tried yet. Bucketfuls if need be. And they had a good substitute for beer… Mix water or grape juice with 1/2 teaspoon of yeast and a tablespoon of sugar. The article didn’t say how much water, but see the next article I quote.

Next, there is copper. You can wrap copper tape around the perimeter of your garden beds. We had done that against slugs when we lived in Olympia, Washington, and it had helped, but our garden is beyond that now. We’d be keeping the snails in! They also mentioned sprinkling copper pennies around the plants. Hmm, could try that. Evidently the snails get something like an electric shock from the copper.

Crushed egg shells were next. “The egg shells have sharp edges which feel unpleasant under the snails’ soft bodies, so they will avoid climbing over them to get to the plants.”  A side benefit here is that the calcium in the shells is good for your soil.

Snails are killed by coffee. “Studies conducted by the U.S. Department of Agriculture have shown that coffee is extremely effective at repelling and killing snails and slugs.” You can spray coffee around in your garden, even on the snails themselves, and you can put coffee grounds below the plants you are trying to save.

The article goes on with more ideas, including some use of pesticides which wasn’t an option for us. But I had all those tabs still open in my browser, so I explored further.

I’ve recently been doing more of my research on Pinterest, and when I put garden snails into the Pinterest search box (at the top of any page there), there were lots of cute snail crafts and also links to how to keep a pet snail. Carrying on, I found one particularly useful article for my murderous purposes.

It has a recipe for making up warm yeasty water to use instead of beer. I quote:

You don’t need to be exact at all, but here are some approximate measurements:
2 cups warm water
2 Tb sugar or honey
1-2 Tb yeast
Basically you need enough sugar to feed the yeast so it will grow.  It should get all foamy.
I also read that snails/ slugs are attracted to the smell of honey, so you can add that too.  I’ve tried both and didn’t notice a difference and sugar is a lot cheaper.
We tried this, but we put it in yogurt containers and the depth didn’t appeal to the snails. Will try again, though. The warmth is for the yeast to grow. it can be cold when it goes out to your garden. There are some good illustrations on that page.
By now,  other webpages were repeating these ideas… plus mentioning ducks. Not an option for our yard here.

An enjoyable permaculture article on snail control  starts out with ducks and chickens and goes on to mention several of the approaches I’ve already covered here, along with a few others. It does mention diatomaceous earth as well. It also came up with how to eat snails. So if you were wondering (as I did for one brief moment) “Can you eat garden snails?” the answer is yes, and here is what you do:
Cap­ture the round snails and place in a box or bas­ket full of finely ground non-gmo corn. After sev­eral days, the snails guts will be cleaned out. They can be boiled and dipped in but­ter or coconut oil. Buen provecho!
I’ll pass on that, thanks!

Well, even an obsessive librarian like me (no longer working as a librarian but my obsessions stick) can overload on reading about killing snails.  But here are more articles with further facts about garden snails.

If you’re on Pinterest, here’s an image if you’d like to post. In any case, beside the two obvious snails, some of those little blobs are also snails, just getting a start on life on our bean plants. We’ll be using several of these methods and I will report back what works! 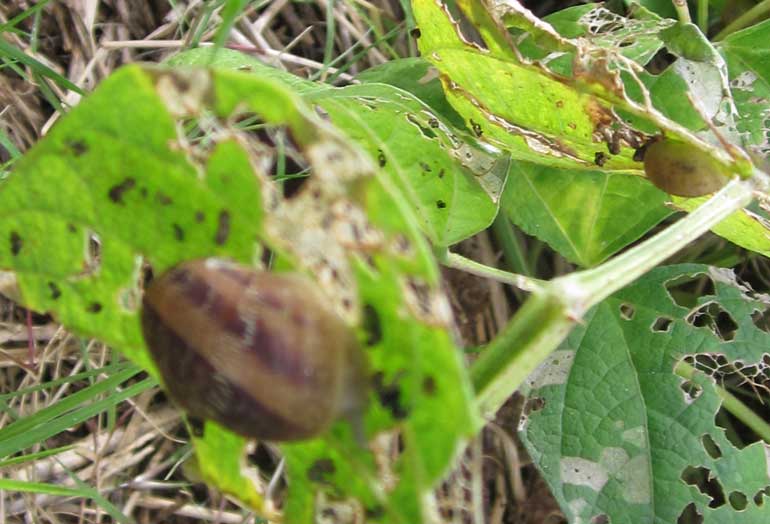