In recent years, barter has become more and more popular in our society. It’s a great way to save money and interact with people in a different way.

Think about goods and skills that you can barter. One woman on an internet forum commented that she had stored fifty pounds of chocolate chips for barter. I couldn’t do that myself – I’d be too tempted to eat my money!

Barter systems are widespread now in Russia, China, Africa, and many other places. This is often direct trading, with no currency, gold, or silver involved. In Russia, many teachers are paid in vodka rather than in rubles. The internet has facilitated the creation of all sorts of barter networks. Some of the trades are huge – even international –  while others are neighborly.

During the depression, barter was widespread. For example, one movie theater sold tickets for 10 cents or 25 cents, but it would also take eggs, corn, or wheat.

You do need to work to develop a good reputation in your trades. Be fair, and learn to say a friendly “no” when a trade isn’t right for you. If you let the other person suggest the terms of the swap, you may get a better deal. If the other person wants you to make the first move, suggest something more favorable to you than you expect to get. You may get it or it then becomes the basis for some dickering. If you’ve bought things in Mexican markets, you’ll have the general idea.

If you are better prepared for emergencies than others in your area, they may ask you for something basic that they need. Sometimes you may not be able to spare it, or you may just want to give it to them,  but at other times barter may be a way that makes everyone feel better. If you want to buy some things now for possible barter later, generally select things that are durable, reasonably small, and basic.

Here is a book on how to barter: 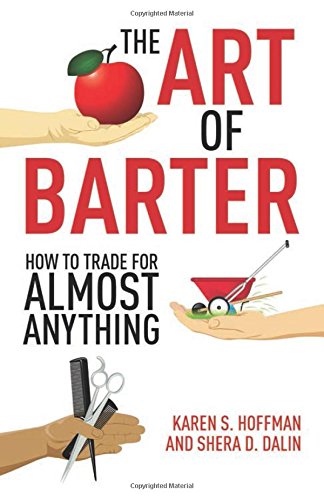