I learned how to vacuum seal jars over ten years ago, and I’ve done it ever since. 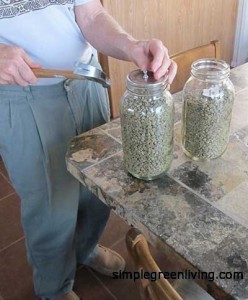 By vacuum sealing, much of the air and thus the oxygen which encourages spoilage is pumped out. This makes it a good thing for longer term storage of grains, nuts, beans, herbs, spices, and a lot of other things.

Vacuum sealing can be done with fresh foods to keep them fresher, but I haven’t developed that habit. Mainly we do this for the jars we use in our kitchen as airtight kitchen containers. This isn’t a substitute for canning.

We use an inexpensive device called a Pump-n-Seal. That link goes to their website; when I looked at Amazon, I didn’t find them. But it’s simple enough to order directly from them.

Our kit originally came with a sturdy pin but that got lost and we just use push pins. My husband could probably just push the pin into the jar lid, but I can’t easily and prefer to use a hammer to tap on the lid. You could do this step somewhere other than on top of glass if you preferred, but it is simply just a litle tap. Also, you can use and reuse glass jars other than the Ball canning ones we mostly use. I’ve used ones that started out holding pasta sauce, for example.

Next, you cover that hole with what looks like a tiny yellow bandage. This is provided in the Pump n Seal kit and can be reused. In fact, I am still using the yellow tags, or tab-cheks as they call them, that came with my original kit. You can get more from the company too. 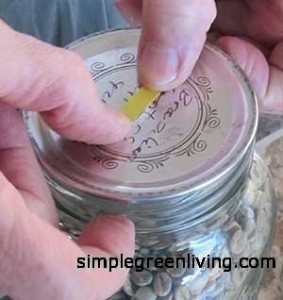 Once that’s firmly in place, you put the vacuum sealing device over the tab,  and pump up and down on it. Depending on what’s in the jar, it will be roughly somewhere between 3 and 30 times. A jar full of liquid will take almost no time at all, but the rice and beans we often use this with take longer. You can feel the air blowing out of the tiny red vent, more at first and less as you get done. This picture isn’t the greatest because the empty top of another half-gallon canning jar is right behind the device and looks like it is part of the action! Anyway, once you have done that, you just pick on a tab to ease the pumper off your jar.

We put jar rings on for storage. 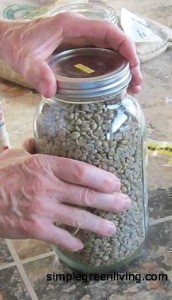 I’ve found that if we keep the vacuum sealing device handy, we use it a lot more. It lives in our kitchen, in the little wooden box you see below, with a hammer, a push pin, some jar lids, and a marking pen. You can see the little yellow tab on the tall jar of black beans in the front of the bottom shelf. So when I go to take some out, I just take off the ring, lift up on the yellow tab,  and pour out the beans I want. Because the Pump n Seal is right there in the box, it just takes a few seconds to re-pump. 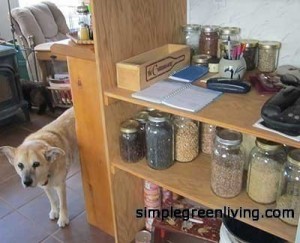 Here’s a video that describes the process…

So that is how to vacuum seal jars.