The Food of a Younger Land is a partly-fascinating tour around the US during the depression. With a subtitle of A portrait of American food- before the national highway system, before chain restaurants, and before frozen food,  you get the idea. There were major regional variations in those days. Author Mark Kurlansky found the drafts of a Depression project that had never been published.

To be called America Eats, it was a compilation of food writing from different regions, but when World War II came along, it was abandoned. It had been part of a huge government project to provide work for writers, and Eudora Welty, Nelson Algren, and some other famous names of the era worked on it. So did a lot of people whose writing abilities were minimal. Kurlansky–himself a very good writer–compiled, edited, revised, and wrote an introduction.

I happened to see the book on the new book shelf of a nearby public library (in Saguache, Colorado, gift of the garden club), and I’ve had fun skimming through most of it and dipping in here and there. I enjoyed a short article about the Horn and Hardart Automats in New York, which I can just remember from visiting there as a child in the 1950s.

Mainly, I enjoyed the overview of depression cooking. We are currently so dependent on the international supply chains that it’s intriguing to see how people ate when their food was local. Not that I want to try possum or other game, far from it!

But I’ve already made one dish from the book, a cabbage-and-apple dish, and I have a few other ideas to try. I was intrigued by the tale of how a young woman in the western regions invented Depression Cake, when her hens weren’t laying and her milk cow had wandered away. That recipe called for bacon drippings, a common ingredient in homes at that time, but not something I’ve had in mine for decades. Still, I plan to do a bit of web surfing and see what I can find.

To find out more about this book, click on its cover image to go to Amazon: 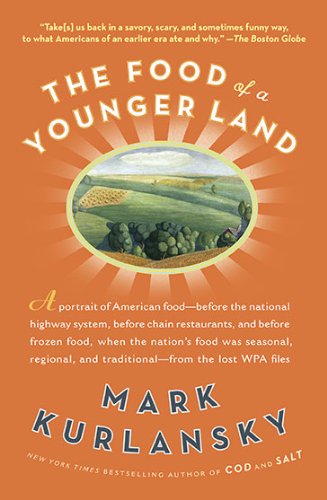