↓
Home→Cooking, Food, Recipes→Two Delicious Ways that Vermonters Ate Their Veggies in the Depression 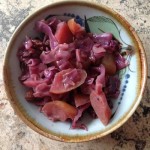 Back in the 1930s, Vermonters were not particularly inclined to eat salads. That makes sense, considering that national distribution of fresh produce didn’t exist at the levels it has since reached. Vermont’s climate isn’t the easiest to grow year-round gardens, though now people are doing it with greenhouses. So how did Vermonters get some vegetables into their diet back then and even earlier? I  recently read a book that raised that question and many others. It was not something I had ever given a moment’s thought to, I admit. But The Food of a Younger Land (link to my review of it) enlightened me. Here is a quote that led to a cooking experiment on my part:

APPLES AND RED CABBAGE: A small red cabbage and about 5 apples, pared and quartered in a pan with a piece of butter, salt, peppers, a clove or two, and water enough to cover, placed over a slow fire to cook until tender. Then the cabbage and apples are removed to a platter, a sauce of a tablespoon of currant jelly and another of vinegar is poured over, and the whole served very hot. Often served as a supper dish with hot biscuits or as a vegetable for dinner. Again, in place of a salad which Vermonters have never taken to very kindly. (page 31) 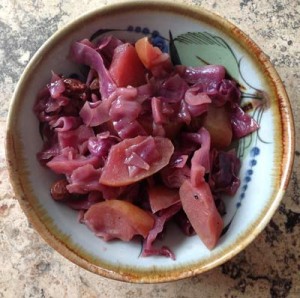 I cooked this up, with a couple of modifications. Lacking whole cloves, I put in about 1/4 teaspoon of ground ones. Lacking currant jelly, I just threw a few raisins into the cooking pot. It was delicious, and I had never thought to combine cloves and cabbage. We had this as a side dish one lunch with an omelet, and there were leftovers. They became a side dish for another meal, served cold that time. Yum. (The photo is of my version.)

The other way that the book ascribes to Vermonters is to boil up a bunch of “greens” which could be any green-leafed veggie, including lettuce. Then you chop up the greens and put them in a frying pan with some butter and broth made by combining butter, a bit of flour, and water. Or they could be cooked with bacon or salt pork. Sliced hard-boiled eggs are often used as a garnish. I’m not likely to cook my lettuce, but I do like steamed kale, chard, or other greens with a bit of olive oil drizzled over them at the table. Same general idea!