“I’m guessing you’re a full timer,” I said to the tall man with a friendly smile who was camped a couple of sites away from us at Conchas Lake State Park in New Mexico. I nodded at his South Dakota license plates, but his camping setup was also a clue. 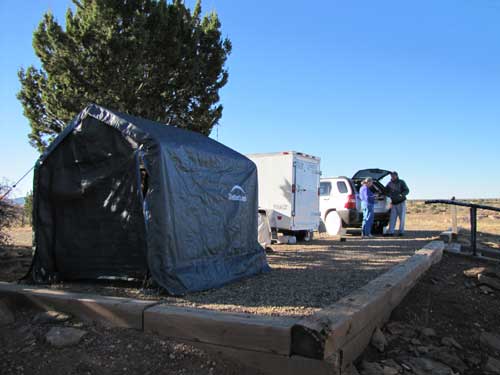 His SUV was loaded with plastic containers that looked organized and he hauled a small cargo trailer. Just beyond it, he had a good-sized tent set up.

“Yes, I am,” he said, “Call me Bandanna Dan.” I soon learned that he was from back east and had been camping in many parts of the country for four years now. Like many others on the road, he had had a job he hated and a crumbling marriage. When he was laid off, he looked at his bucket list and went to baking school. After working at a bakery for a while, he went on to other things on the bucket list, and when the list was done, he decided to try camping. Over time he’s developed methods for doing things in ways that suit him.

I told him I was a blogger and invited him to join us for dinner. Over soup I admitted to being endlessly curious about how people do things, which he had probably already noticed. And I asked him for tips and observations.

“I call this an ‘end of the road’ tour,” he said. “I do a lot of my camping in national forests. I’ll go out along a road, and take a road off it, and a smaller one beyond it till I get to the end of the road. Once I find a place, I stay for the 14 days we’re allotted till we’re supposed to move on. Then I go into a town and grocery up and go on to another place. I love the quiet out there. I’ve thought of getting a dog, but I find that once the small critters get used to my presence, they are curious, and the chipmunks and the birds come closer.”

I’d noticed that he was gentle with our two dogs, Lola lifting her face to him as he called her Cupcake.

He’s met a lot of people in his travels, and he said, “The further out I go, the nicer they get.” He didn’t have much use for the slammers and sharers he’d run into in parks: campers who repeatedly slam their vehicle doors as they set up their tents and people who play their music loudly. He’d managed to avoid snaggers, boisterous groups of fishermen that a park ranger had warned him about.

In New Mexico, he’d found that a good rule of thumb for whether he had gone far enough away from “civilization” was the number of beer cans by the side of the road on public lands. When it got down to about one can per quarter-mile, he began looking for a campsite. An even better signal was a thrown-out cardboard box that had held a dozen beers: seeing one of those was a signal that the people had turned around to go back for more. 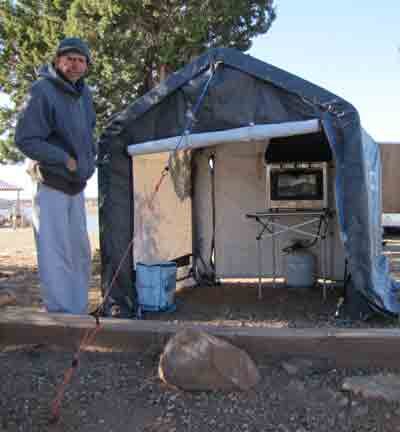 “How do you do food?” I asked. Bandanna Dan had an interesting setup. He cooked in the tent, on a stove with an oven because he made bread often. His breakfasts featured grains which he had soaked overnight to shorten cooking time. For lunch, he usually had beans, which he cooked in a small pressure cooker. Dinner was something light. He took his tent down overnight, so he wouldn’t have to be concerned about bears or high winds. All his food was stored in containers in the back of his SUV.

He stocked up on grains and beans at Whole Foods and other such places, and then in the towns near where he was camping, he’d get onions, jalapeño peppers, apples, and a few potatoes and zucchinis. He kept his perishable food in a Yeti cooler, an expensive but heavily insulated item that had easily paid for itself. He’d even stopped buying ice for the cooler a couple of years earlier, having created a system of cooling jugs of water at night.

By the time he’d gone into this much detail, I felt I could ask him for some idea of what it cost him to live and travel. He said that he didn’t keep track precisely, but that the past year had run him about $8,000 in total. He’s not yet on social security but likely has enough savings to tide him over until he will be.

He surfs the internet at public libraries, and knowing that I was a librarian, he recommended several New Mexico  libraries he’d especially liked. 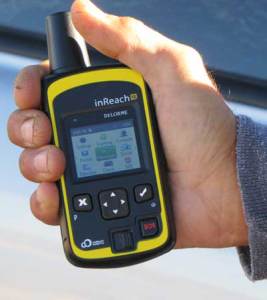 He has a pay-as-you-go cellphone on the Verizon network. He hasn’t been overly happy with Verizon’s coverage areas, but he also has InReach, a satellite backup, a $300 device that costs him $10 a month to send a handful of text messages. He uses it to send a short message to a few people he stays in touch with, and he does this twice a month when he moves campgrounds. They can text him back that way too, and he checks it daily. Regular email waits till his next visit to a library.

His trailer is his bedroom and he spends a lot of time reading in it. He gets free or inexpensive ebooks from various places and was interested in my recommendation for the Kindle Unlimited program. He recommended a site called buddhanet.net, where he suggested a free ebook called Handbook for Mankind. I downloaded it. 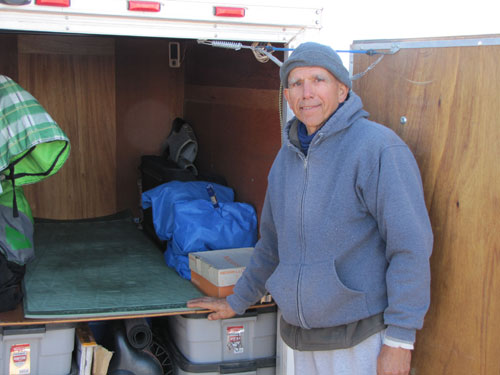 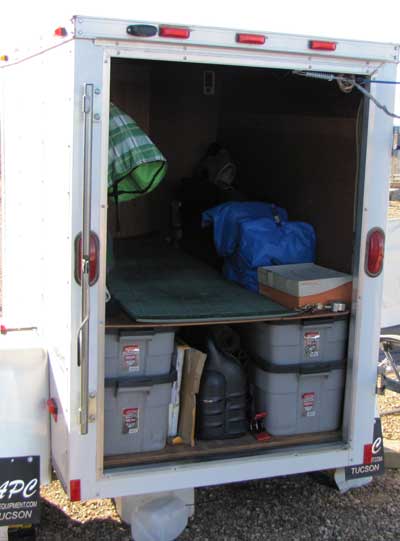 The Sleeping Trailer Holds a Lot

What else does he do? A typical day in camp would include watching the sunrise with his coffee, making his meals, doing quite a bit of Qigong, going for a long walk, and watching the sunset. (He’s doing Qigong in the image at the top of the page.)

Both Bandanna Dan and Kelly looked blankly at me when I blurted out, “You know, we are the rich, the independently wealthy.” Practically in the same breath, they said “I don’t think so.” But when I said, “We are doing what we want, pretty much every day,” they both nodded.

The next morning, we stopped by his camp for Kelly to take the photos here and to say goodbye for now. “What you’re doing is ethnographic,” Dan observed.

I lit up. My undergraduate degree was in Cultural Anthropology, and I had begun a graduate program as well.

He went on, “I think you’d have a book in this, if you talk to enough people and draw out the similarities. Backpackers and people going down the road in million-dollar rigs have many commonalities in how they see the world, whatever tools and toys they use. And people are interested.” 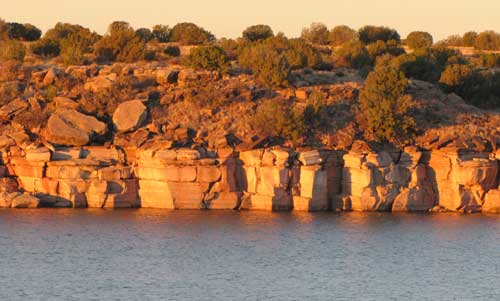 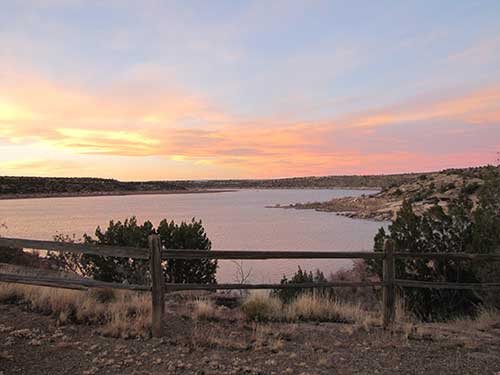