I didn’t know that I had diabetic symptoms, but when I sat on my computer glasses and had to go for a new prescription, my ophthalmologist said, “You have some diabetic retinopathy. You have diabetes, right?”

“Not that I know of, but my mother did,” I said, gulping. “Guess I’d better get checked out.”

“Ask your doctor to let me know, and come back for another exam in three months,” he said. Yikes. I had been tested for diabetes every now and then because of my mother’s history, but the tests had never indicated that I had it. 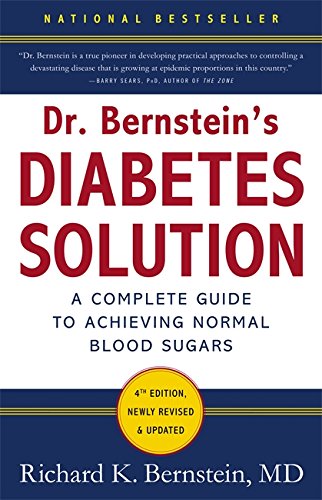 As soon as I got home, I went online. Happily for me, my research soon took me to Dr. Bernstein’s Diabetes Solution. Clicking on the title or the image here will take you to where I got it, on Amazon. It’s available in both Kindle and hardcover versions. I began with the Kindle and later got the hardcover as well. You can also read selections from the book–quite a lot of it, actually–at this page of Dr. Bernstein’s website.

A Type 1 diabetic himself, Richard Bernstein was 12 when he was diagnosed in 1946. He grew up to become an engineer, got married and had three children, all the while dealing with many severe symptoms of diabetes. In 1969, a piece of equipment became available which enabled physicians to measure blood sugar levels. It wasn’t available to the general public, but his wife is a physician, and they got one, for over $600. He began taking measurements, and being an engineer, he took many detailed measurements. Within about a year, he had figured out what to eat to control his blood glucose levels. As he kept them at normal levels, many of his symptoms diminished and even disappeared.

It didn’t surprise me that when he tried to publish accounts of what had happened, medical journal repeatedly turned down his reports. Nobody believed that people could control their blood sugar and thus their symptoms. After some years, he went to medical school himself–he was 45 when he began–and within a few years he began a practice specializing in diabetes. Over time, his theories have become much more widely known, and blood glucose meters are now inexpensive devices available over the counter at pharmacies and online stores.

The American Diabetic Association guidelines are very different. Much higher blood sugar levels are acceptable in their eyes. Dr. Bernstein’s approach is still controversial, but as I devoured the book it made a lot of sense to me. In a nutshell, he says that carbohydrates convert to simple sugars and those raise the blood sugar levels, in diabetics. I began eating in the way he recommends, plenty of veggies except the high-carb ones like potatoes, yams, and some others, plenty of protein as meat, cheese, and eggs, with cooking fats fine. No sugars of any kind, no grains.

This way of eating wasn’t all that hard for me to do. It happened that I had been eating very similarly to that, just for general health and to see if it would help with my fatigue. Because of that, I didn’t suffer much of a “poor me” syndrome at not being able to gobble up the sweets like I had done so often in my life.

I got a blood glucose meter and started testing my blood. Then I got another one, when I found that the FreeStyle Freedom Lite meter was recommended by various sources as being particularly accurate.

Meanwhile, I’d been trying to find a doctor in our area who would be open to this way of eating. That took a while, but when I finally found one, she was very encouraging. “You don’t have diabetes,” she said after studying my notebook with my readings. “You don’t even have what’s called pre-diabetes. You do have some glucose intolerance.”

When three months were up, I went back to the ophthalmologist. He examined me closely. “I see no retinopathy at all,” he said. “It was a mild case you had before, but now I see nothing at all. Keep up whatever you are doing!”

I’m rereading Dr. Bernstein’s book for the third time. I’m learning some ways to fine-tune my methods. I’m finding that I can eat a serving of peanuts as a snack and my blood sugar barely goes up, but that plain unsweetened yogurt isn’t my friend except in very small amounts, as milk naturally has lactose in it. On the other hand, I’m putting whipping cream in my tea now with no problems.

Kelly and I have a saying, that we have “good bad luck.” That is, we have bad luck at times, like anyone does, but it tends to work out okay. I thought breaking my glasses was a bit of bad luck, but catching my tendency to diabetes early was very good luck. If you have any suspicion you might have diabetes or a precursor, do look into it. And there’s nowhere better to start, in my mind, than with Dr. Bernstein’s approach.