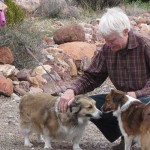 Our dog Nicky is a Sheltie-Papillion cross. We’ve had him for almost two years now, and he’s about six. Supposedly he was born in a puppy mill, sold in a pet store, and passed through Craigslist a couple of times before a Sheltie rescue group got him, and he came to us from them. With a history like that, he’s not always the friendliest of dogs, though he and our Rottweiler Lola are devoted buddies.

He has been something of a trial on this trip, there’s no getting around it. His shrill bark warns away both humans and dogs. I’ve never known him NOT to bark at another dog in the New Mexico state parks we’ve been staying in.

The people camped just uphill from us also have a Sheltie cross. Brandy is about a year older than Nicky, came from a shelter when she was quite young, and is Sheltie and Corgi. She doesn’t much care for other dogs.

Kelly was outside chatting with Brandy and one of her owners. (We didn’t get the human names, just the dog’s!) So he took Nicky out to meet them. Keep in mind that Nicky doesn’t generally care for tall men, but he accepted this guy. At first I stayed inside, where Lola was crying to go join the fun. But after a little bit, I heartlessly left her inside and took my camera out to join the action. I thought a dog several times larger than Nicky and Brandy would change the dynamic too much.

By then, Brandy and Nicky had made friends, with Brandy using growls to tell Nicky not to come too close.  Left to right: Kelly, Brandy, Nicky, and Brandy’s person. 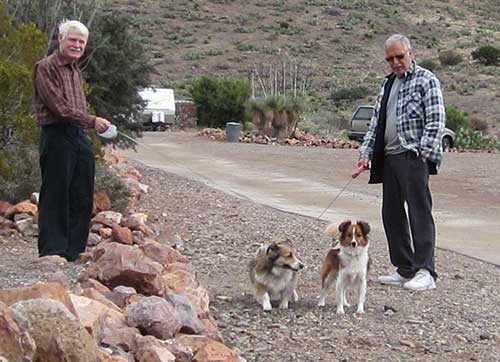 At one point Nicky thought Brandy wanted to play and she snarled. His movements were too abrupt evidently. When Kelly squatted down, both dogs wanted his attention and were polite with each other: 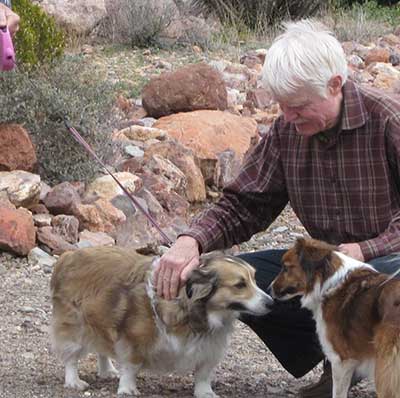 Brandy sat next to her owner, and the party was over, for now. What good dogs! There will be more to this story, as we’ll be next-door neighbors for some days yet. I can’t help but think that they both recognized a deeper kinship in the other one than in all the dogs–large and small–they’ve not been even this friendly with before. Maybe they remind each other of littermates from long ago. 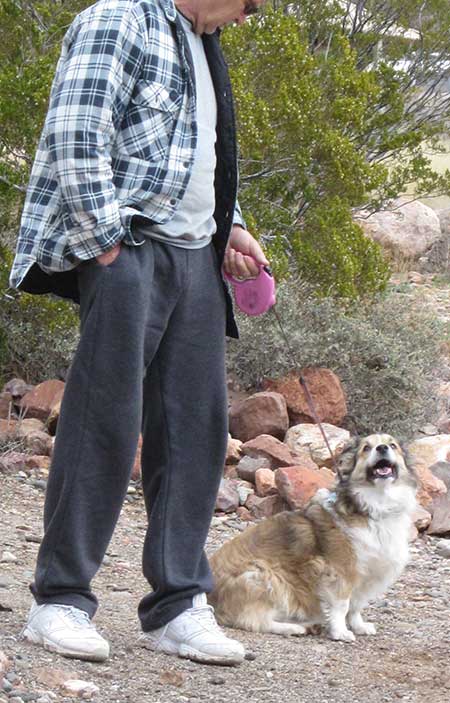