↓
Home→Big Picture→Lights Out by Ted Koppel: A Review with Reading Notes 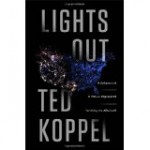 Ted Koppel has written that the U.S. power grid is very vulnerable to cyberattack and that if parts of the grid go down, it could easily be weeks or months before they could be brought back… if they could be. Koppel has been a newsman for most of his long life, including twenty-five years at ABC’s Nightline. He is skilled at pulling the threads of many interviews into a story, and that is exactly what he has done in his new book, Lights Out: a Cyberattack, A Nation Unprepared, Surviving the Aftermath. The tale is scary.

The government isn’t prepared for the chaos that would ensue if the power was out. Janet Napolitano, a former head of Homeland Security, estimated that the odds of another nation or a group sabotaging the American grid were very high, 80 to 90 percent. Several other people gave Ted Koppel similar opinions, though how soon sabotage might occur is anybody’s guess. I happened to see Koppel on the Daily Show and he told the mostly young audience that while at his age he might not see the grid go down (he was 75), they were much more likely to.

You can read most of the first chapter at Amazon.com, by clicking on the “Look inside” link… in fact, you can skim through much of the book that way, if all you want is the gist. I’ll be giving you my short summary here as well. If you decide to buy the book, I recommend the physical book rather than the Kindle version so you can lend it to friends, family members, and neighbors.

I consider it an important book. Lights Out is a wake-up call. My only quibble: Koppel didn’t cover alternative energy sources and distributed generation as fully as I would have wished. He barely mentioned them. If distributed generation were widely adopted, it could be a solution to the problems outlined in the book, as you are much less reliant on the grid. My guess is that the topic isn’t well covered in the book because it’s not yet on the radar of a lot of the people Koppel interviewed. Here’s an article I happened to come across later that also points to some affordable solutions: How to Save the Electrical Grid. 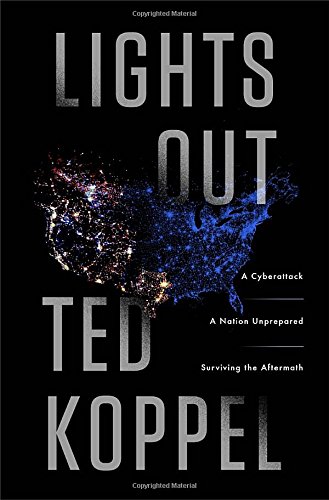 The United States power grid is a patchwork of over three thousand different power companies, many of them very small, most of them privately owned. As with many industries, government regulation isn’t welcomed. Much of the equipment in use—such as large power transformers– is decades old, hard to replace, and in locations that are easy for people with bad intentions to get to.

In August 2003, a power line shut down after it brushed against some trees in Ohio, and an alarm that should have been tripped wasn’t for some reason. The surrounding grid couldn’t handle the changes, and some fifty million people were without power for up to two days in the northeast US and southeastern Canada. Investigation later revealed that many of the parts of the grid were not up to standards. To date, this is the worst power outage that has occurred.

There are three sections of the grid: see the images on this page for details, but essentially it’s divided into the east and the midwest, most of Texas, and the western states.

How is the Grid Vulnerable?

If parts of the grid were attacked, it wouldn’t be easy or necessarily possible to restore them. Large power transformers might take over a year to replace at a cost of at least $3 million each, and the Department of Energy estimates there are tens of thousands of them in use. They can’t be transported easily, as each one weighs about half a million pounds.

Access to the operations of these companies is via internet logins which are often not as strict as they could be. When hackers get in the grid, they would have to know what to do, and it’s not simple, but much of the software is used worldwide. Koppel states that the Russians and the Chinese have the expertise to break in and in fact have done so. He adds that other nations, as well as criminal and terrorist organizations, are in the process of learning how or of buying access. If an attack occurs, it probably won’t be obvious where it came from. Companies do not always realize that their security has been compromised, sometimes for many months after a breach.

Government officials, including ones in FEMA , disagree with each other in their risk assessments. At least one FEMA official that Koppel interviewed thought that New York City would have to be evacuated, but other officials said that would be impossible. But then, some officials thought an attack on the grid was possible and others didn’t.

EMP (electro-magnetic pulse) attacks could destroy electronic equipment without even hacking into the grid. Such attacks could cover a large area, many states. One bestselling thriller, One Second After, paints a terrifying picture based on this scenario. After Koppel mentions the novel, he talks about a congressional commission that researched what an EMP attack could do to the infrastructure of the US. The report (and Koppel gives a link to it in the notes at the back of the book) estimates that only about 10% of the population would still be alive after a year. Apocalyptic.

If even one of the three sections of the grid was out, tens of millions of people could be affected.

Air traffic control, health care, communications, the railroads, could all be affected. Gas stations could run out of fuel, with serious effects on travel. Without electricity, cellphones and the internet wouldn’t work reliably, and many people would be desperate for information.

If the grid went down, in many places water supplies would run out. No water to drink, cook with, or flush toilets would quickly be a crisis. Humans can live a while without food but only a few days without water—and hungry people frequently become violent.

Koppel goes into more detail on what might occur in his book.

What Can We Do?

Informing yourself and others is a good place to start. You can print this article and share it with other people.

At the beginning of the last main section of his book, Surviving the Aftermath, Koppel says “For the most part public reaction to the possibility of a massive cyberattack has not even risen to the level of apathy. Apathy suggests the awareness of a problem and the decision not to worry about it. We’re not there yet.”

There are no plans at the government level for coping with  long-lasting, large-area outages. One military expert, now retired, told Koppel that “it’s policy and it’s money” that keep plans from being developed and put in place. We need to contact officials at all levels of government and tell them that effective planning is essential and that they should explore distributive generation much more.

Meanwhile, at home, stock up on water and food. You may read advice to prepare for two or three days, but that is more pertinent to brief storms. Koppel recommends several months to a year’s worth of supplies, not an easy project but worth some effort.

Some governments, such as the city of New York, and some people stock up on MREs (meals ready to eat), with an average shelf life of about five years. Freeze-dried foods can last up to twenty-five years. Koppel interviewed the owners of a business that supplies both kinds; its retail outlet is The Ready Store, based in Salt Lake City.

I have never considered myself a full-fledged prepper, but with Mormon ancestors, I’ve always had a few extra batteries, rolls of toilet paper, and the like around, plus more food than most people. After reading Ted Koppel’s Lights Out, I think I’ll do more. If you’d like to follow my blog posts, just sign up in the sidebar. While I found the book hair-raising, the story isn’t over yet.