I’ve written three cozy mysteries that form a trilogy.The central character is the Curious Librarian, and yes, I have been a librarian! Lorin Long, the heroine, is about 30 and she moves to a charming Colorado mountain town called Silvermine… it’s a fictitious town which is a blend of Salida and Alamosa. (My husband and I moved to Silver City, NM, after I finished the trilogy… just one of life’s coincidences.) She is the director of the town library and mysteries abound. Why was a library board member found dead in the library? That’s the beginning of the first book. What about the homeless people who live in the forests outside of town? They are the subject of the second book. Andy why does Lauren’s cute little dog bark murder in the last book?

Cozy mysteries are fun. There is usually a murder (and there is in all three of mine) but the violence and gore are only barely touched upon. Sex is also kept to a minimum, though I certainly did mention it! I am pretty sure that this series is over as I did get tired of weaving the whodunit plots.

Below are the blurbs on the books. Each is available in paperback and for Kindle. (If you have a subscription to Kindle Unlimited, you can read these for free.)  If you are a library user, you could tell your librarian about the books and they could order them! By the way, the librarian shown on the cover is an actual library director! 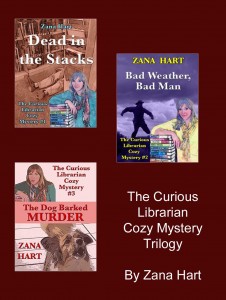 Dead in the Stacks: The Curious Librarian Cozy Mystery #1


The Silvermine Public Library had never had a dead body on the floor before. The body was that of library board member Mark Wagner, and it could have been a heart attack.

But of course the possibility of murder came up. Who would have killed Mark? What about the many women he hit on, putting his big hands where they didn’t belong? What about the many people who had suffered from his rapacious real estate deals? If you counted up who was annoyed at Mark, it would be hundreds or even thousands of people in Silvermine (pop. 10,000). If you counted up who might really have done it, well, there were several suspects.

Some people were talking about the library director Lauren Long, but she had her hands full, trying to keep the momentum for a new library going forward while everyone’s attention was on the death. There was her love life to keep going, too, and then someone tried to break into her house, more than once.

Was she marked for murder? In this new story, the first of the Curious Librarian Cozy Mystery series, author and librarian Zana Hart weaves a tale that leaves red herrings all over the library. 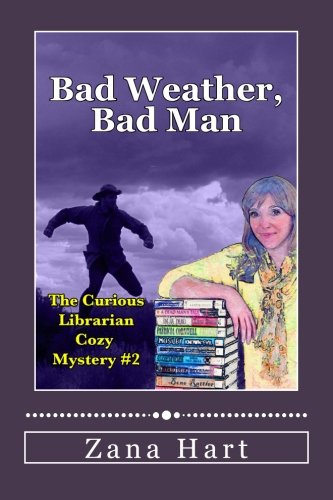 Lauren Long, library director in the charming town of Silvermine, Colorado, welcomes homeless people to use the library. One is Billy, who sends email from the library’s computers and warns Lauren about a bad man.

When Billy is found dead in the forest, murder is suspected. Billy’s cousin Barb comes to town and puts on a wild party to celebrate his life.

At the party, Lauren meets Ace, a radical and brilliant homeless man. Despite being warned, Lauren soon agrees to a request from Ace which could cost her dearly.

She came to Silvermine because of her yearning for a sense of community, but it seems that she may have misjudged some people, including her boyfriend Justin.

And nobody but Lauren seems to care who committed the killing. When something completely unexpected happens on her thirtieth birthday, Lauren must deal with panic.

When she learns an important secret, things begin to make sense. Eventually Barb reappears with astonishing news, and a future better than anyone imagined begins to unfold.


Lauren Long, the head of the public library in the charming little town of Silvermine, Colorado, is determined to focus on her job while her boyfriend Justin is out of town. When her neighbor Mike is found dead on his kitchen floor, Lauren can’t help but think that it’s murder.

There’s the matter of the pink dog leash, for one thing. She tells the police that she will stay out of the investigation, but her curiosity makes that impossible.

Complicating matters, Lauren’s little dog Mickey has his opinions about who the good and bad people are, and he expresses them by barking, hiding under the bed, and trembling.

Mike had been running a center that used dominance-based dog training methods, and Lauren’s close friend Samantha wants to buy it and change it over to the positive reinforcement approach she uses. Sam talks about some unsavory events that took place in town before Lauren moved there.

There are ominous sounds in the night a time or two at Lauren’s house. Her boyfriend Justin pleads with her by phone to borrow his brother’s Rottweiler. Lauren is unconvinced that she is at risk, as all she is doing is thinking.

But she gets a stern warning from the hero of a famous series of mystery novels that a dead librarian is completely useless. Still, she comes all too close to jeopardizing the dreams that she and Justin have for their future. What happens changes her forever.

You can read the beginnings of the books at Amazon. Enjoy!