Cardamom is my new favorite spice, and it’s in both of these recipes for rich sweets from India. They’re called fudge by the Indian cooking teacher Mina Joshi, but they don’t follow the American usage of having chocolate in them. Both these recipes were from Mina’s site, and you can see them here: cashew fudge and Magaj. They were both big hits at my recent dinner party. I was glad because the second one didn’t turn out at all like I expected. I even wrote FAILURE at the top of my recipe printout, but I was quite wrong.

This is very simple and quite tasty.

Using that sugar syrup gives the sweets a texture as if you had used honey. One of our dinner guests asked me if I was sure I hadn’t used honey!

Magaj is popular Gujarati little cake, often made for Diwali. Mina’s recipe (link in the first paragraph of this article) was for a sugar substitute but I avoid those so I just used plain old sugar. Where she called for ghee, I used butter. What I made came out quite odd but in the end I had made a kind of fudge which my guests raved over. This recipe is what I did…

I really wasn’t sure if this was going to be edible, but everyone loved it, including one guest who doesn’t like garbanzo beans. I gave our guests take-home baggies of this as we had a lot of it. They were going to put it in their freezers to store it a while, and that’s what we did with the remaining pieces here. There are no photos of this as I wasn’t optimistic that it would turn out so well.

Here’s a Pinterest-sized image, if you are into that: 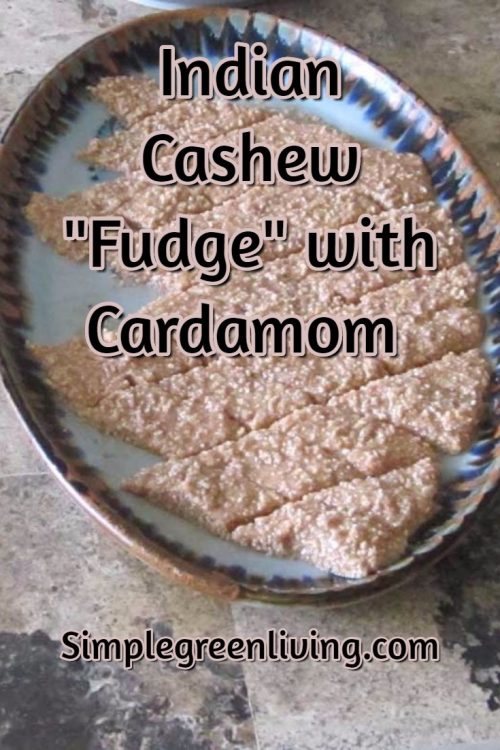 Updated: Monday, August 29, 2016
Please note that I may make a commission on things you buy through this site. More info here.