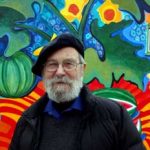 We recently met Alvin Alexsi Currier, as he and his wife Anastasia have been living nearby for a couple of months. Friends of friends, we’ve had several meals and good conversations with them. Soon they will drive back to their home base in Wisconsin and she will stay there (quilting like crazy, no doubt) while he returns to places he often goes to in Europe. So what is inspiring about that? Two things!

One: Alexsi, as we call him, will turn 85 this week, and that picture of him was taken a few days ago, in front of one of the buildings here in Silver City. Anastasia is only a few years younger. I love to spend time with people in their 80s who are so alive and vital. Sure, we all may be a bit more forgetful than we once were–I admit to that and I’m more than a decade younger–but they are both actively creative. She quilts and he writes, photographs, and draws.

Two: They are deeply rooted in spirituality. Here is the bio from his website, AlvinAlexsiCurrier.com:

Alvin Alexsi Currier is most widely known for his children’s books and his passionate fascination with Eastern Orthodox European history, folklore, customs, and traditions. He is also recognized as an artist and illustrator. Born in 1932 in Minneapolis, he studied at Macalester College, Union Theological Seminary, and the Free University of Berlin. Ordained a Presbyterian pastor in 1956, he served for 35 years that included an exchange pastorate in Germany, and 11 years as a College Chaplain. Finding his spiritual roots in the ancient Eastern tradition, after retirement in 1991 he was received as a layman in the Orthodox Church. For the next 15 years he and his wife Anastasia supported themselves by arranging European tours and pilgrimages. This vocation allowed them to travel widely in the Orthodox world. They now live in retirement in Cumberland, Wisconsin.

Please note that it doesn’t say QUIET retirement! They are also busy with their large blended family.

He has ten colorfully illustrated children’s books in print and that link takes you to the page on his site that describes them all and you can buy them from there via Createspace, the publishing arm of Amazon that we also use.

Several of his children’s books are also on Amazon.com. Here is a link to his author’s page there and here are the four children’s books at Amazon that are currently available as Amazon Prime products… just click on an image to go through:

Grandma’s Ritual Towel Alyosha’s Apple: A Tale of Old Russia The Miraculous Child: A Christmas folktale from old Russia The Blue Lady of Sycamore Hill: The appearance of Mary the Mother of God to the Orthodox Lemko people of Poland

Speaking as a former children’s librarian, I’d suggest that you could mention these to your local public library!

Some Visual Presentations of Alexsi’s

On his website, he has a page about PowerPoint and SmileBox presentations he has put together, on a range of topics… here’s the link. I particularly enjoyed the PowerPoint presentation about the beautifully woven and sometimes also embroidered ritual towels found in village Churches and homes of Orthodox Eastern Europe.

With his permission, here are a couple of those slides of the ritual towels:

While she and Alexsi were here this winter, Anastasia created the tops to over a dozen lap-sized quilts. She didn’t finish them yet because they came in a small car, with her portable sewing machine. So she will finish them later. Here are two lap-sized quilt tops hanging on the wall. She made these for an upcoming wedding in the family: 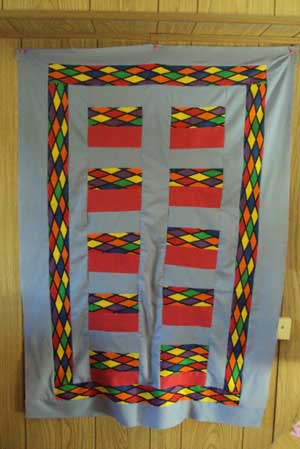 So I hope you are as inspired as I am by the work of Anastasia and Alvin Alexsi Currier! And may it spark your own creativity!