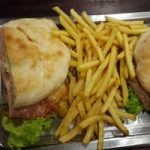 Before my husband and I returned to the US after living in Mexico from 2005 to 2010, we also gave thought to moving to Uruguay. Expat living there had appeal for several reasons, but home won out. Still, I’ve maintained a curiosity about a country that is unusually welcoming to Americans who want to live there.

So when our good friend Peter Rice emailed me last week that he and his wife were in Uruguay, I asked him for a blog post. He obliged, and here it is. Peter is about half my age, so he didn’t write about Uruguay retirement, but you can get the idea of what life is like there, from the viewpoint of a lively and adventurous writer. He and his wife are not expats but they are living in South America for a number of months, working remotely online.

Uruguay is a chill country with its act together. The food ain’t bad either.

MONTEVIDEO — The sandwiches at Pizzeria Venecia are a sight to behold, and they taste even better. I always get the chivito, which is to Uruguay what the Sonoran hot dog is to Tucson or the po’ boy is to New Orleans. It combines thinly sliced steak with ham, scrambled egg, red pepper, lettuce, tomato, and an out-of-left-field ingredient that actually ties it all together: olives. We generally forget that critical acid component to good food, but they don’t. With a side of fries and Venecia’s unusually attentive (for South America) service, you’ve got yourself a satisfying evening.

Sandwiches in this world do get more outrageous, of course. They even get more delicious. But the chivito takes what is available and what is reasonable, serves it up in a compact package with a little love, and doesn’t try to be all pretentious or frenetic about it. 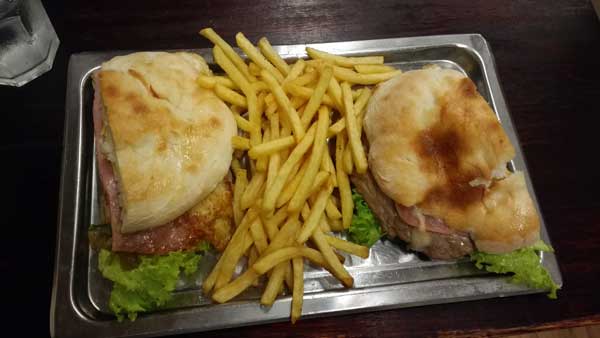 Much like Uruguay itself, in fact. It is a small country of 3.4 million tucked away in a forgotten corner between Brazil and Argentina whose primarily claim to economic fame is a thriving beef exporting trade that dwarfs the still significant tourist business. About 1.3 million people live in the capital, Montevideo, a classic looking town with tiled sidewalks that sometimes stands in for Havana in movies and features a lot of buildings that could have been imported from Europe. The country is interesting, but not flashy, and little details you notice give the reassuring impression that whoever is running this place, they seem to know what they’re doing.

The people seem to be no different. In neighboring Argentina, the residents of Buenos Aires are fond of preening about the streets and cafes showing off the best bodies that plastic surgery, eating disorders, and cigarettes can buy, which is fun to watch but also gets old. People in Montevideo maintain a more casual look, and you don’t feel out of place in jeans, a tee-shirt, and tennis shoes. It all seems to work together to reinforce the calm.

So does TV.  A few weeks ago the evening news in Uruguay featured a ten minute report on the redeployment of various UN peacekeeping troops (the country is a major contributor to those forces), and the front-page banner headline in the paper the other day loudly proclaimed progress for a new law that mandated closed captioning for the hearing impaired on TV. Stations, it was breathlessly reported, could also opt to show a picture of someone in a small box off to the side doing sign language. And there they go again, gunning for Pulitzers.

This muy tranquillo bearing seems to go straight to the top. The most recent ex president of Argentina (a country I genuinely like but one that just makes this dart throwing so easy) was famous for politicizing the national statistical agency to the point where nobody trusted the (very high) inflation numbers anymore.  The most recent ex president of Uruguay, meanwhile, donated most of his salary to charity, once picked up a hitchhiker in his 1987 Volkswagen Beetle, and lives on a modest country ranch with his ex-guerilla wife and a three-legged dog.

But perhaps this is the natural order of things for a country that it cannot possibly entertain illusions of mass global influence. The world has plenty of small countries that desperately want to think they are big, and it does not usually go well. There’s Venezuela, Iran, Cuba, and of course the nextdoor neighbors. They should all probably just focus on what they’re good at economically, then get on with the business of reducing traffic congestion, making sure the garbage gets picked up, and furiously typing out all those captions. 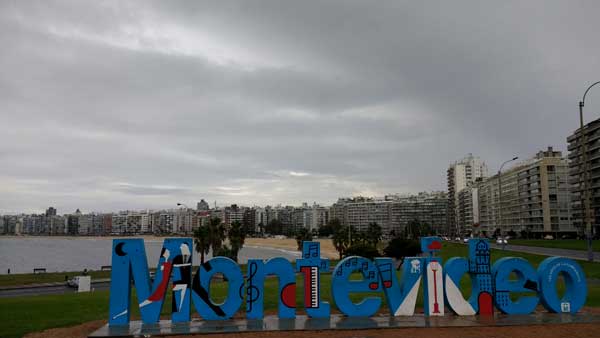 Montevideo, Uruguay’s capital on the beach

Uruguayans live in a definitively small country, and seem to be at peace with this state of affairs. They export lots of cow parts, play host to battalions of barbecue-loving tourists, then kick back and enjoy the legal pot, the low inflation, the negligible crime, the fresh vegetables sold on practically every street corner, and a truly smooth and refreshing liquid ass kicking called grappamiel. The world returns the good vibes in the form of an excellent Moody’s credit rating, a beneficial regional trade agreement (Mercosur, led by the Brazilians), and by not turning this way for answers every time something explodes in the Middle East.

Being a small country brings some oddities, to be sure. At my gym, the ellipticals speak English, the treadmills speak Portuguese, and the bikes speak Spanish. We all work out while watching Argentine TV broadcast European soccer games. The automatic lockers for outside bags at the grocery store speak Mandarin, and the display is hilariously translated English. But that’s life with a population that is basically New Mexico plus two copies of El Paso. Uruguay is not going to get into the automatic locker business, and somehow life will go on pleasantly enough.

Besides, it’s a nice day. A good day, in fact, to meet a couple of friends down on the boardwalk, review all the mundane happenings, and guzzle truly fantastic amounts of mate. That should take up a couple of hours at least. It will also create a sense of anticipation, because soon we shall all be eating chivitos once more.

Peter Rice is the author of Liberal for Conservative Reasons: How to stop being obnoxious and start winning elections. He blogs at peterbrice.com, and can also be contacted there or via Twitter @ricepeterb.

Bits from an email he sent me after the article:

-It’s very far away in a manner that’s hard to appreciate in North America. It hit me when I realized that it’s basically easier to get to Europe from the United States than to here. Visitors are going to be few and far between, and tickets are expensive. The whole Southern cone has a kind of end-of-world island mentality about it.
-The Spanish is bat shit crazy. They use the “vos” for everything so the tu form conjugation and commands are different. You would still get by, of course, but I found my general comprehension went down 30-40 percent and has barely ticked back up with time. Also lots of very different words for things.
-It’s cheaper, but nothing to write home about. Nothing like Mexico. But of course I’m only accounting for food and airbnbs.
Still, there’s a lot to recommend it. I can particularly see you in one of these smaller interior towns like Durazno, or maybe something up near Brazil. Montevideo is chill, but it’s still 1.3 million people, which doesn’t exactly scream your lifestyle to me. The bus system to the interior, in any event, is excellent.

So I Admit to Fantasies of Retirement in Uruguay…

My husband already knows that my imagination takes me all over the place, but I have to admit that when I read the political news online, it gets to me and the thought of getting away from it all comes up. So much so that I bought this guidebook at Amazon.com  and read through it: 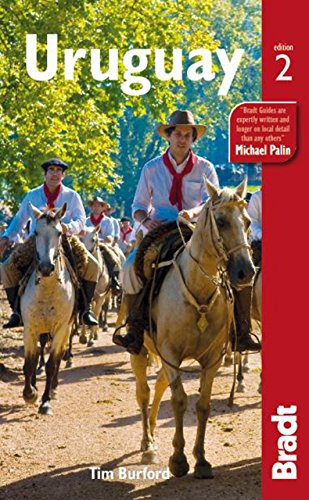 It made me want to vacation there, stroll on the long unspoiled sandy beaches, explore the towns near the hot springs… But move there and be an expat again? I’m not there. I love where we are. I could write about the pros and cons about moving to Uruguay but I’ll leave that alone for now. Here’s a good blog by an American living in a coastal town near Montevideo. Food for thought…

And if you are into Pinterest, here’s an image sized for there. Thanks if you do pin it! 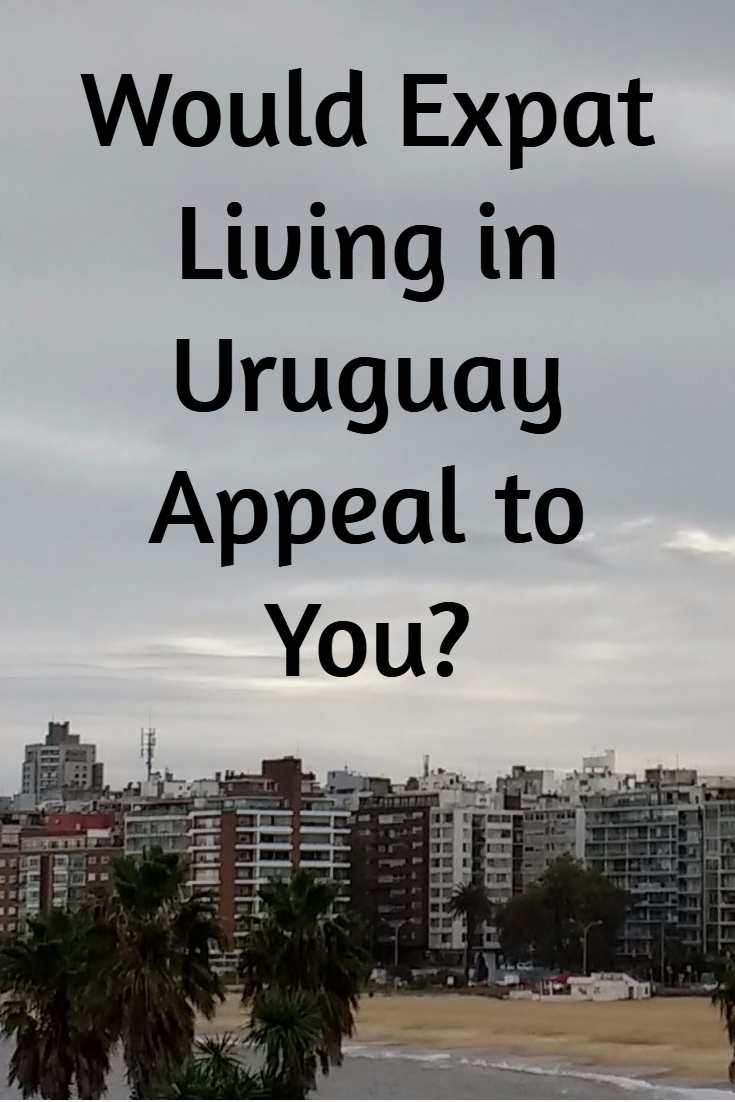 Updated: Tuesday, May 16, 2017
Please note that I may make a commission on things you buy through this site. More info here.