The growing season is brief where we live, at 8,000 feet  in Colorado. That’s one reason we were so pleased that the house we bought here  came with an attached south-facing greenhouse.

We were busy getting settled in during the fall, and didn’t get around to planting the greenhouse till mid November.

Out of doors, it has gotten as cold as 29 degrees below at night here. At first we were using a small heater in the greenhouse, but it does have insulating shades we put in at night AND a small hot tub which radiates some warmth. So we got brave…

… and stopped using the heater. The coldest it has gotten to since then inside the greenhouse is about 25 degrees.

The plants seem to do just fine with these slightly-below-freezing temperatures. Most of them are brassicas like kale, kohlrabi, and brussels sprouts. Our bok choy has been doing great too.

Starting about a month ago, we’ve been eating quite a few greens from the garden. Here are some I collected a few days ago. The ones on the left I stir-fried lightly.  We ate the ones on the right in salads. 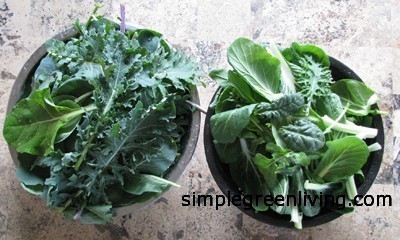 Updated: Tuesday, December 16, 2014
Please note that I may make a commission on things you buy through this site. More info here.