We had a spring snow right after we bought a 32-year-old Tioga motorhome. Over an inch of snow sat on the roof of the rig, and it was a perfect test of the roof. What we discovered was water dripping down, over the kitchen sink and the sofa.  My husband Kelly wasn’t bothered.  “I expected things like this in an old vehicle,” he said. “It’s not impossible to fix a leaky RV roof.” I was glad he thought so! To the left, you can see a few of the several dozen holes that turned up. Right away, he caulked the dubious places on the roof with silicon caulk, as a stopgap measure, in case of more rain.

Then inside the rig, he got to work on the discovery process of where the leak was coming in. It wasn’t pretty! He had to remove several layers from the ceiling. There was a thin layer of off-white vinyl wallpaper that was what you saw when you looked at the ceiling. He tried keeping it in case we wanted to put it back on, but it got messed up and neither one of us cared.

Above it was a layer of plywood, about 1/8 inch, damp and deteriorating. Then there was a layer of insulating material, extruded polystyrene, and since it was impervious to moisture, its condition was okay, but to remove it, he had to break it into fragments. Next, just below the aluminum roofing there was another layer of 1/8 inch  plywood that was rotten and crumbling.

How many years had moisture been trapped in there and doing its damage? No way to know, but the damage was so extensive that it had to have been a long time. The moisture had been trapped for so long that even the steel roof frames were badly rusted. Happily, they were still solid enough, though.

Rapidly becoming an expert in how to fix a leaking RV roof, Kelly removed everything below the aluminum roof sheathing, in a band that went across the vehicle. The area was about two feet wide between the steel roof frames, and included parts in a closet on one side of the rig and a cabinet on the other side. Messy job!

Then he did nothing on the project for over a week, to let everything dry out.

In the picture below, you see the roof after he used a wire brush wherever there was so much corrosion that it had gone through the aluminum. Ordinarily, we don’t think of aluminum as rusting, but in this case, because of the moist conditions underneath it for so long, the aluminum had corroded and weakened to the point where it had that constellation of holes shown in part at the top of the page. This process naturally removed some of the silicon caulk, and he also removed the paint down to the bare metal where corrosion showed. 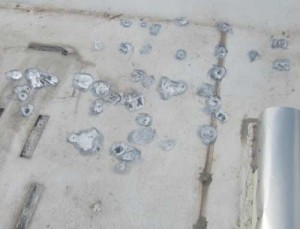 Immediately after wire brushing, Kelly applied Bondo automotive body repair putty over all the suspect areas. It sets up very fast; he only had a few minutes to work with it. You have to mix two different things that come in separate containers. The putty itself is in a can and the catalyst is in a tiny tube.  Once that was done, he was pretty sure there wouldn’t be leaks any more.

Roof Not Leaking after the Bondo

It did rain a couple of times right after that, but the Bondo he had put on the roof kept all the water out. At this time, we could also observe that all the rest of the roof appeared dry, the whole length of the motorhome. There were signs of repairs from the past in a couple of places, and Kelly checked those especially carefully. They held.

Below, the ceiling restoration begins, as Kelly installed the upper layer of plywood. He used 3/4 inch plywood instead of the previous 1/8 inch, for a couple of reasons. It needed to be solid enough that he could walk on the roof, and he needed to be able to screw into it, to install the new aluminum roofing. 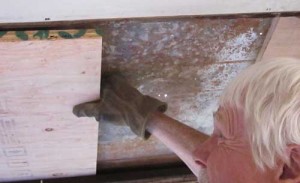 Then he put on the roof a layer of aluminum flashing he happened to have on hand from a house project. In the picture of the roof shown below, the aluminum is the dark strip. Because the flashing was thin, it needed to have two strips of 1/8″ aluminum bar at either edge, where Kelly put screws through to hold everything flat. Before the flashing was put on, it was caulked with silicon along the edges to provide a good seal. 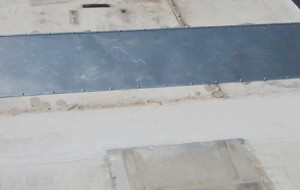 Back inside, he put up a layer of insulation which we happened to have on hand… you barely can see a bit of  it in the circle below. Finally, he added a thin layer of plywood. We had that because it had blown into our yard in a storm last year! We will eventually paint the plywood, but probably not any time soon. We’re talking about painting over some of the old wallpaper on the kitchen walls and if we do, we’d paint the whole kitchen area at the same time. 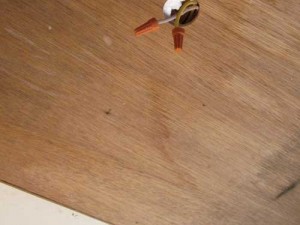 The last part of the repair was a paint job on the roof, two coats (on two separate days) of an elastomeric roof paint to provide more secure waterproofing for the future. It’s thicker, and goopier to install, than regular paint. I made a comment that he could start a side career to fix RV roof leaks but he made a face. 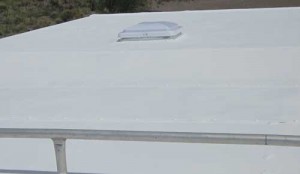 A few days later, we had an afternoon downpour of monsoon quality, here in the high desert in Colorado. It went on for over an hour… a perfect test of the whole roof. Result: Our leaky RV roof was leaky no more!

Updated: Monday, May 16, 2016
Please note that I may make a commission on things you buy through this site. More info here.