I admit it: we’ve gloated a lot on this New Mexico trip about the weather, that is, about the relatively benign weather we’ve been having compared with the frigid temperatures and numerous snowstorms that folks in our hometown in Colorado are experiencing. When I read a discussion on a Facebook group for the town about what’s been happening as people drive on black ice, I thanked my lucky stars. (I didn’t read about any serious harm done but there were sure some wild slides in cars on the ice.)

It’s a lot warmer here. We are about as far south as you can get in New Mexico, wrapping up a two-week stay at Poncho Villa State Park, just outside of Columbus, NM. At night, we see the lights of the neighboring town of Palomas, Chihuahua, Mexico, about three miles away, and we’ve gone there.

Diversion in a Laundromat 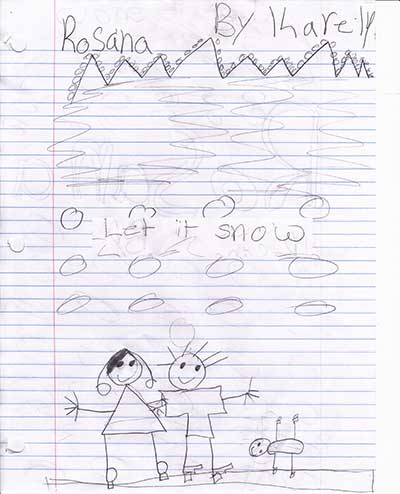 On New Year’s Eve, we went off in the morning in search of propane, so essential for heat, hot water, and cooking, and to do our laundry. It’s a small laundromat, run by a friend of mine, July McClure from Columbus. We got our clothes washing, and I stayed there while Kelly took the motorhome on down the road to get the propane, which goes directly into our tank.

Also in the laundromat, were a couple of women chatting in Spanish. One of them left, and I began a conversation with the other one in Spanish, about the weather. She exclaimed about how cold it had been, and asked how I knew Spanish. I told her we’d lived for five years outside of Guadalajara. And we went on a while.

She had two granddaughters with her, and the older one and I began chatting in English. She’s nine or ten and wants to be an artist. I asked her to draw me a picture I could put on the internet. I had told her about my town in Colorado with lots of snow, so I think the mountains at the top of the picture are snow-covered. At the bottom, we have me, my husband, and our dog Lola who had been barking at the kids a few minutes earlier. (Rosana is my actual name, Zana my nickname.)

Her “Let It Snow” turned out to be accurate here yesterday. I had a second dental appointment in Palomas, and so Kelly and I took the motorhome to the parking lot in the U.S. right by the border. He stayed there, heat and internet on, dogs happy to have his company, while I walked across the border, past a variety of stray dogs, and on to the dentist’s office (Smiles Dental Clinic) on the main street, just about half a block south of the Pink Store, a restaurant and Mexican handicrafts store that the town is well known for. As I sat in the dentist’s waiting room looking out the window, it began to snow. Soon it was snowing hard. Pedestrians pulled hoodie hoods up and otherwise did their best to protect themselves.

After my appointment, it was still snowing, and I got damp on my way back to the motorhome. I felt sorry for the three brightly clothed women begging in Palomas–Tarahumaras I think–each one with a young girl and one also with a puppy, spread out about a block apart.

Today, the sun’s out and the wind is blowing something fierce, up to 30 miles an hour. It’s an icy wind. No gloating here today. We’re grateful to be warm in the motorhome, with plenty of propane.