The other day, we drove twenty minutes into Deming, NM, from Rockhound State Park to do laundry, get groceries and a few other things, and have lunch out.  I was surprised to get a life lesson as well: I’ve been a snob. About Deming.

My perceptions started nearly twenty years ago, when we were full-timing in these parts one winter, staying here at Rockhound, at Poncho Villa State Park down in Columbus, and at other places in the area. We made some good friends in the Columbus area; two of them have since died and one now lives in Canada, but we do still have one friend in Columbus. We bought some land in the Deming Ranchettes at a tax auction, thinking we might do something with it sometime. It was cheap enough that we’ve kept up the property taxes. We also made some friends around Deming.

But back then, and in our few visits in the years since, my mind kept Deming in a box. I saw the many tattered old mobile homes with derelict cars in their yards, around the county. I saw poverty in other spots too. I read about problems with people crossing the border illegally and I recoiled at the common term for referring to those people: aliens. (Not the UFO kinds,but as in “illegal aliens.”) I saw senior citizens (I wasn’t one myself then or even thinking about being one eventually) around town and living in RV parks that looked like barely-improved parking lots.

So I put Deming into the box labeled “Useful places with little to offer me.”

Along the way, there were hints that I wasn’t getting the whole picture, like when we went to the museum, or when the new library came in or when I started going to the amazing used bookstore, the Reader’s Cove. But it didn’t help last year when I asked some people in a local store how Deming was doing and they said it was doing great, that Walgreens and a fast-food chain (I didn’t register which one) had just opened up. 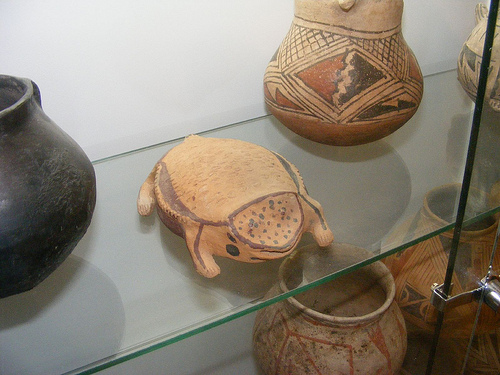 The human mind handles the complexities of reality by using mental boxes, we all know that from politics, from seeing how our friends make their choices, and more. So why did that box of mine fall apart? Did it have to do with my being in a particularly good mood that morning, as we drove into town?

That’s when it started, I know that.  I started noticing the diversity of places.  The nice houses and mobile homes seemed to increase in number and visibility, and I could see the love and caring that had gone into planting trees, windbreaks, and bushes.

I started the grocery shopping at Pepper’s while Kelly went to the hardware store. I do like Pepper’s… you’d think it’s part of a chain from the diversity of what they carry, but it’s a local store. When we started coming to Deming there were two other grocery stores as well, but both of those have closed and Walmart has opened up. Anyway, I’m getting used enough to Pepper’s floor plan that I was moving along pretty good.

In one aisle, I slowed down to walk behind a Hispanic family with two cute little girls wearing matching gray quilted coats, and I could hear how lovingly the woman who was probably their grandma spoke to them in Spanish.

In another aisle, I noticed an Anglo couple in their 50s or so. The man made a quiet comment out of the side of his mouth, too softly for me to overhear, and the woman cracked up in laughter.

In the produce section, I noticed an extremely handsome Hispanic man, complete with cowboy hat and boots, shopping with a man who appeared to be his father. They were chatting in Spanish.

Also in the produce I saw a good-looking white-haired Anglo man coming towards me and smiling. Kelly! I told him about how I’d been enjoying the diversity of people doing their shopping. It made me think of a saying I’d learned when we lived in central Mexico, Cada cabeza un mundo, or “Every head a world.” It often had a negative connotation about the person being spoken of, but there in the grocery store, I was just thinking of how every person is so unique and how the mixture of ethnicities makes for an even richer texture.

Later, walking from the bookstore toward the Chinese restaurant while Kelly was doing other errands, I fell into conversation with an old Hispanic woman. After I told her I’d lived in Jalisco, we spoke Spanglish, flowing between the two languages.

Sometimes I think Kelly could live anywhere at all on the planet. Me, not so much. But I’m certainly less of a snob about Deming now.