I had just been thinking that we were almost out of the tasty dried bananas I sometimes make in our dehydrator when someone offered me about two dozen organic bananas. So we now have about two quarts of dried bananas chips. Making them is a simple process that doesn’t take long. First, I’ll show you my method and then I’ll sing the praises of home food dehydrators.

Here are half the bananas: 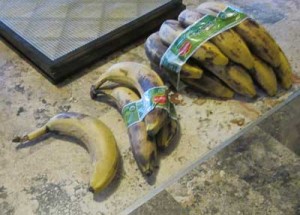 I sliced each banana into a bunch of rounds. Ideally you do these to be the same width, but it doesn’t matter if they are somewhat uneven. You may need to dry them a little longer if you have some extra thick ones. I don’t put anything on them. Certainly no honey! They come out tasting like candy as it is… 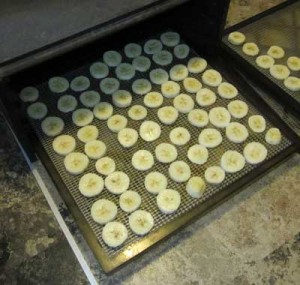 Once the dehydrator was full, I put it out in our laundry room, where we wouldn’t listen to its humming: 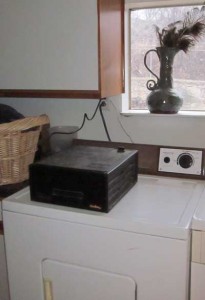 I started this batch after lunch and they were done in evening. It was this morning before I put the dehydrator on the dining room table. My little dog was happy to supervise, probably hoping I would drop something, but I didn’t! 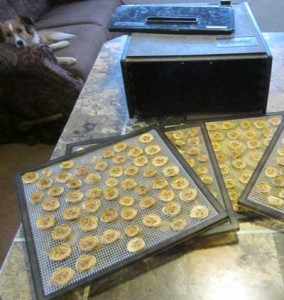 With dry hands, I filled up a quart jar with the first batch. I would have vacuum sealed the jar but I decided to wait till both batches are done.

Then I got the second batch going. Actually, no point in vacuum sealing both quarts, as whenever I make these, there’s a time period when dried bananas are a favorite snack! I will seal a quart and a pint, and put the other pint out handy on the kitchen counter where we also have nuts and seeds.

I eat in a low carbohydrate manner, and I find that one…well, okay, two or three… of these chips satisfy my sweet tooth.  How long will dried banana chips last in a vacuum-sealed jar? I don’t really know, but we moved here six months ago and this was the first time I made them in this house. The remaining few from the last batch are still just as good. 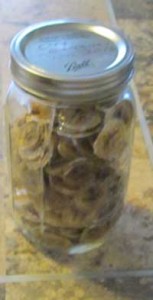 Why I Love Food Dehydrators

I dry organic veggies from my garden, especially tomatoes, kale, and carrots. All of these are great thrown into a crock pot or stove-top soup or stew, and having them on hand makes it very fast to get those dishes started. I don’t find that a soup made of just dried veggies has enough character, but the vegetables complement meat or beans well.

Dried tomatoes are delicious in salads or as a snack too. Last winter, we were roaming around the state parks of New Mexico in our old motorhome, and in many of the small towns, the tomatoes in the grocery stores were unremarkable. Not to worry, we had bright red dried tomatoes from our garden. Some years I’ve bought extra tomatoes to dehydrate, from farmers’ markets or stores.

If I can find the sweet Walla Walla onions during the season that they are in the grocery stores, I buy quite a few and dehydrate them. Don’t think I have ever seen them organic, but I’m not a total purist. Any dried onions are tasty, and I like how they brown in the deyhdrator, giving whatever dish I use them a caramelized flavor. Yum!

I’ve had the electric food dehydrator I used for this project for many years, so long that neither Kelly nor I can remember when I got it. It’s a small Excalibur. I’ve often wished for a larger one, and a couple of years ago I bought another dehydrator, the Nesco FD-80A Square-Shaped Dehydrator. It’s done well for me too.

If I were getting one now, I would get the larger 9-tray Excalibur dehydrator. I think Excalibur is a great brand. Here is what the larger one looks like: 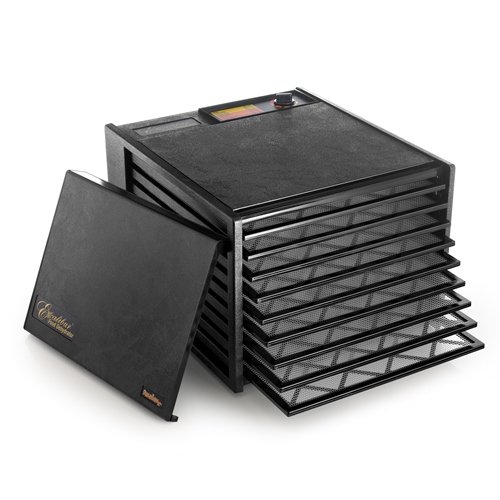 I also have a Hanging Raw Food Dehydrator – Solar Powered, which I use mainly for drying mint for tea and other herbs. It’s quite popular for making raw foods. But that’s a topic for another day. It’s time to go check again on my not yet dried bananas… there is a lovely intermediate stage in the drying process when the bananas taste like custard!