Silver City, NM, is a town of something over 10,000 people, off the beaten track in SW New Mexico, about an hour’s drive from Deming. Kelly and I have been in Silver–as people often call it–for almost two weeks now. We had come here once, about 15 years ago, to visit friends who are no longer here. Silver City has a food coop, where I figured I could get some of my favorite foods that aren’t in any New Mexico grocery stores we’ve been to, like ume plum vinegar. The town has a style that reminds us of great alternative towns we’ve lived in: Berkeley California, Ashland, Oregon, Olympia, Washington, and our present home, tiny Crestone, Colorado.

Before we even got there, we were charmed by this video:

After we’d been here a while, we recognized some of the singers and places.

We’re camped right in town, about a 15-minute walk from the main downtown area along Bullard Street, at the Silver City RV Park. It’s a private campground, next to one of the creeks that flows through town, and when it rained there was water in the creek. There are trees budding out as it’s spring. At about 6,000 feet, it’s generally cooler here than it was in Deming, but we’re getting plenty of t-shirt weather. This campground and has a real sense of community among the inhabitants, many of whom live here long term. The front office contains a coffee shop, and the regulars seem to be there every morning. (It also has immaculate  restrooms and a laundry room.)

We’ve been walking around town a lot. Sure enough, I got my ume plum vinegar at the food coop and have been stopping in there often for veggies, cheese, curry powder and other organic goodies we won’t be likely to see till we get back to Crestone. Kelly has been riding his electric bike in a wider radius than I have been walking, as we’ve got the motorhome plugged in to water, sewer, and electric. We aren’t moving it at all, a welcome change.

I’ve been doing my usual librarianly thing of picking up brochures and booklets. In one called Silver City Life, I was reading an article about a hair salon called Curl Up and Dye. I was moved by the comment that they send hair to places that can use it for wigs of cancer patients or people with long-term hair loss problems, and since they offered a free cut to people with long hair, I went in and had the cut. My stylist told me that they also send hair to another place, where it’s used in mats in the ocean to combat pollution. So wherever my hair goes, I’m back to a very short style which naturally curls a lot. it’s been a few years! I admit to being a bit vain about my long hair, but the inspiring and inclusive service I’d been to Sunday morning at the Episcopal Church had reminded me to love my neighbor.

Kelly has his digital horn with him on the trip, and he’s very skilled at improvising with whatever other musicians are doing. He had done a gig in Deming with our old friend July McClure and the two guys she plays with. Here, he had a chance to sit in for a set with Edie, the woman who starts off the singing in the video above, and 88-year-old Dane on the keyboard, both topnotch musicians. They perform on Wednesdays at Diane’s on Bullard Street downtown. I enjoyed hearing them play the old jazz standards that Kelly grew up on.

In poking around the internet for Silver City information, I’d discovered that Kelly and I could get a free Silver City tour with a very ecologically minded realtor, Cissy McAndrew, who also used to be director of the Chamber of Commerce. (Free again … there’s a theme here!) We did that one afternoon.

Cissy picked us up at the RV park and drove us around Silver City. She has lived here some 19 years and obviously loves the community. She’s got a good route and a lot of historic stories. We went through downtown and she told us some of the history of the Big Ditch, and how the town decided to allow only brick construction downtown, one reason why so many great old buildings are still standing. (Earthquakes are not a significant issue in the area.)

She took us out to the edges of town in a couple of directions, and just seeing the lay of the land was informative. With all the different hills, it’s great to see the ups and downs.

We went past Chihuahua Hill on our way back into town, so named because of the many Mexican miners who came here from the state of Chihuahua. The town now is about half people of Mexican descent and half Anglo. We chatted with a number of Hispanics in our walks around town. They all spoke English, except for an 84-year-old man I chatted with on Brewer Hill, the neighborhood the RV park is on the edge of. I was out for an early morning walk and he was too. When I told him I was 12 years younger than he was, he said in Spanish that he expected he’d see Jesus before I would, God willing! I nodded my agreement.

Back to the tour with Cissy. She took us through the historic district and west to Western New Mexico University (WNMU), then past a playground called Penny Park, because pennies were collected to pay for it. She took us around the northern part of the city, past the hospital, the high school, and then on back into the older part of town.

Later, I asked Cissy about the economy, and she said that mining and tourism are main income sources… there are two active copper mines in the county, and the tourists come to see the Gila Cliff Dwellings and to enjoy the huge Gila National Forest. Food for low income people has been a problem. Kelly and I had noticed that right across the creek from our campsite was a place with a greenhouse and people working to start garden beds in the yard. That’s the Volunteer Center and food distribution also takes place there and in the smaller towns in the county.

It’s fun being here, in a place where there are so many members of “our tribe.” We even looked at a cute old adobe house for sale in Brewer Hill. Hmmm… But in a few days, we’ll begin meandering north towards home. 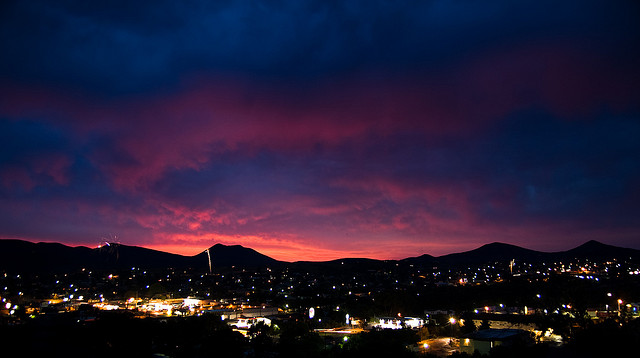 Silver City on the 4th of July, Photo from Flickr

Updated: Thursday, December 3, 2015
Please note that I may make a commission on things you buy through this site. More info here.