Our Wonderbag arrived recently and we photographed its arrival and our first meal. I’ve just turned those photos into a YouTube video, which you can see further down this page.

I was so thrilled with getting our non-electric Wonderbag cooker that I posted this on Twitter:

I’ve also blogged about the Wonderbag here before. So why is this thing inspiring my media outreach so much? (I also posted on Facebook and Pinterest, and believe me I am no social media maven!)

It uses a way of cooking that is energy efficient and I also love that for every Wonderbag cooker sold in the United States, an African family gets one. Since walking long miles to collect firewood is a way of life for many poor people in rural areas throughout the continent, particularly women and children, having a Wonderbag changes their lives for the better. They still need to cook briefly, as you need to bring the contents of your cooking pot up to full boil before putting it in the insulated bag, but it is much less than before. Not only that, but also allergies are lessened for them, as wood smoke diminishes in their lives. Many people in urban areas use fuels, and the bags help them save fuel and also save money.

So there we were with our bag, and here is the short video I made. It’s been years since I made videos but I plan to do a lot more. I love playing with images and music!

I didn’t go into it in the video, as that was a general introduction, but I will admit to you, dear reader. I added the rice on the top and I didn’t put in enough water that every single grain of rice was covered. So there were a few chewy ones. Live and learn.

Last night I cooked with it again, and this time my mistake was using too small a pot. The instructions say to use one that is between two and nine quarts. We have an enamel pot without its long handle, and when I filled it with water yesterday, it took one and three-quarters quarts, in other words just a cup short of the minimum. That seemed worth trying, but it turned out to be too small. After 3 1/2 hours, we were hungry and dinner was undercooked. I think it just didn’t have enough volume of contents to hold the heat. Also, I am not sure if I was able to snug up the bag around it closely enough.

We ate it anyway, crunchy broccoli and all. But I will go back to using the pot shown in the video. Stay tuned!

And if you want to learn more, click on the image. You can also get it in a blue batik color. 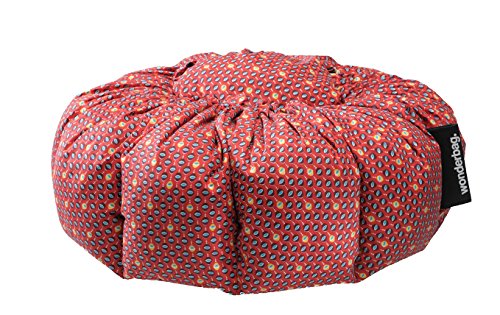