↓
Home→Preparedness→Why Jayne was Prepared for the Fukushima Earthquake

Jayne Nakata didn’t set out to be an advocate of preparedness, but now she is, after her experiences in the huge 2011 Fukushima earthquake, so famous for the massive destruction from the tsunami and the radioactivity leaked from the nuclear power plant.

She is originally from New Zealand. She’s lived in Japan for over half her life now, after she was studying the Japanese language there and met the man who is now her husband. Ah, love stories — I adore them and based on the popularity of my tale of how I met my husband, so do many of you readers. But I don’t know many details of her love story and besides, the tale you’re about to discover has enough drama itself.

She and I met in a bloggers’ group on Facebook. In response to a query I put out about preparedness, she replied (used with her permission):

I experienced the massive triple disaster here in Japan 5 years ago. I live in Fukushima, I had to evacuate from my home and thought I might never be able to return. Fortunately I was prepared for that disaster, because 2 weeks earlier I had purchased everything I would need for such an emergency. We had no running water for over a month, there was no food in our city and no gas to drive anywhere to get some. My family was well provided for and our car full of gas which meant far less stress, although there were plenty of other things like aftershocks and a nuclear meltdown to worry about. Unfortunately it took a massive earthquake in my own country to shake me awake to the fact that a) disasters can happen anywhere and b) preparation is paramount. I thank whatever power it was that moved me to action in advance of the catastrophe that we’re still recovering from here.

The massive earthquake in her own country had been in Christchurch, NZ, not long before.

From this video on YouTube she linked to a post on her blog, written this year (2016) called The top 5 things you can do to prepare for a natural disaster. You can read it there… I specially liked this comment of hers: “Bottles of drinking water when you’ve got no water supply? GOLD!”

Her story is compelling, so I’m excerpting from her blog posts, again with her permission. She was six or seven months pregnant with their first child on March 11, 2011. After lunch, she tells it in her blog… DH is Darling Husband, Maruchan is the baby she is carrying, and Sebastian is their dog…

DH headed into town to file our taxes. Not much later, I got a phone call from him saying he had forgotten some important documents and could I bring them to him. So I got in the car and drove to town and met DH at the tax return centre…

Maruchan was in a strange position and walking around felt really uncomfortable. So I got in the car and was heading home, driving along a small road to exit the car park… when my car started shaking. I then noticed that the power poles were waving back and forth. I stopped my car as best I could without parking too near anything that might fall on it.

We have lots of earthquakes here so I thought it would pass quickly…not so. It just got worse and worse and kept going. People were running out of shops, some crouching on the ground or holding on to each other to stay upright. There was a lot of screaming. Buildings were groaning and rattling and the road seemed to be moving in waves. I stupidly got out of the car as it was rocking so much. That wasn’t much good as it was hard to stay upright and I had to hold onto the side mirror of the car…

After the shaking stopped I drove closer to the tax centre and ran and found DH standing in the carpark. He was surprised to see me as he thought I had just gone straight back home. So we got in our cars and drove home together.

She continues the story:

When we got to our neighbourhood there was no sign that there had been a huge earthquake. I rushed inside to find Sebastian fine. On the way home I had imagined all kinds of things tipped over, tv smashed etc. We found a few picture frames tipped over and few things had slid off shelves. We checked the water which was still working, then we found out we had no phone or internet but the power was still on. Not once did we lose power the whole time, which I was very grateful for.

We turned on our TV which was very precariously balanced but had not slid off its stand to find out what had happened…. We just couldn’t believe what we were seeing. Water washing away cars and houses. Even then we still couldn’t fathom how bad things really were, but what we were seeing looked like some kind of hollywood movie.

We started running around getting important documents together in one place, passports that kind of thing. DH cleaned out the bath and put some water in it. I did the dishes and turned on the dishwasher of all things. Then we sat in front of the TV and tried to get the internet to work.

All the while our house shook every 10 -20 minutes from the aftershocks.

The next day, after a sleepless night with many aftershocks, they could do some texting with family and friends but it was hard to get the big picture.

We resisted the urge to go out and join the panic buying at the supermarkets and petrol stations as we had enough for ourselves and there would be more people who were not as well organised as we were. DH was/is full of admiration for me for getting organised and putting together our emergency kit. My own aunt and uncle were without water and power for two weeks I think after the Christchurch earthquake so that was a big wakeup call for me to go and do it. My students at school scoffed at me a bit for it as they all said that Iwaki would never be affected by a big earthquake – or why would they build a nuclear power station near here…

On Sunday we started to get increasingly worried about what was going on at the [nuclear] power station. We didn’t have internet, just my cell phone and the TV to try and figure out what was really going on. We felt terribly confused watching the official reports on TV and then getting frantic messages from overseas saying other things. So we decided to take the middle ground as best we could. 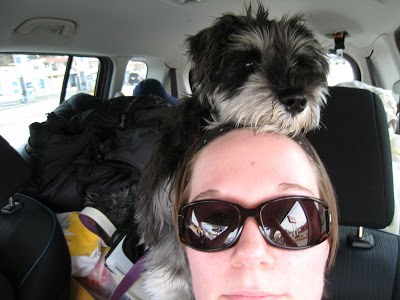 By Monday, I was getting really stressed out as we still weren’t seeing anything on the TV like what my family was reporting to me. Nobody else in our neighbourhood appeared to be leaving. Were we mad to be contemplating leaving? Then a text came from a friend saying they had made it to Tokyo. Then we knew we would be able to get somewhere and so we decided to leave. We grabbed everything we would need to sleep in our car if necessary, packed up food, water, Sebastian, some clothes that were still clean. DH packed the car as best he could. We couldn’t fit much else in there and I have no idea how we would have managed to sleep in it if we needed to but we set off prepared for the worst.

They took off to drive to Tottori, the town where her husband’s parents live, far from Fukushima:

We were heading away from the power station and the prevailing wind was blowing in the opposite direction, out to sea… another explosion had just been reported and we hadn’t traveled that far away from the power station yet.
We stopped at 7-11 near Inawashiro and Sebastian played in the snow a bit. We were so lucky that the weather had been warm to that point as the roads were clear and dry. The western side of Japan gets a lot of snow in winter and could easily have been impassable.
When we left Aizu, we encountered more and more petrol stations still selling petrol and waited only 5 minutes to fill up our car. Then I really started to relax and tried to think of our “escape” as more of a road trip.
After 3 days here in Tottori we are feeling a lot more normal. The normality of life here helps with that. As far as we can tell, there is still no water in Iwaki, no supplies getting through. All of the people I have been worrying about there since we left have now also left town for the comfort of areas where gas, food and water are readily available. I don’t blame them. Even without the threat of the power station, it is not a nice situation to be in.

Jayne went to visit her family in New Zealand, while her husband went back to their home in Iwaki, as he had to get back to work. She ended up having her baby in NZ before going back home to Iwaki, where Geiger counters were in frequent use. Fortunately, they were able to stay on there, with water restored and radiation low enough. 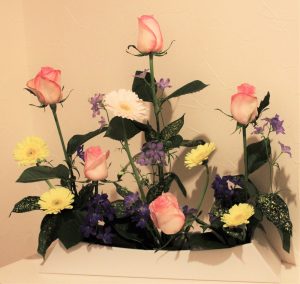 She has since reflected on it all and on the aftermath. Here are a couple of her blog posts I found where she does that: One Year On and Fukushima Now?

So nowadays, after all that, life goes on well. Besides speaking out about the benefits of preparedness, Jayne is raising two children with her husband.

Here’s one of her arrangements.

She has done another preparedness video, since the one further up on this page. I’ll give her the last word:

Updated: Wednesday, August 10, 2016
Please note that I may make a commission on things you buy through this site. More info here.